Khloe and Lamar may be headed back to Los Angeles sooner than they expected. The NBA star has been semi-fired from the Dallas Mavericks and demoted to the D-league. 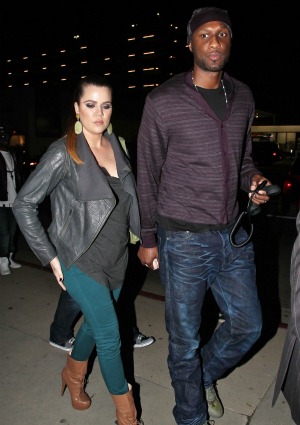 2012 is shaping up to be a pretty crappy year for Khloe Kardashian’s husband Lamar Odom. First he was given the heave-ho by the Los Angeles Lakers and traded to the Dallas Mavericks. His baby-making attempts with Khloe have been totally unsuccessful. Then his father, who is suffering from cancer, took a turn for the worse, leading the player to miss nearly two weeks’ worth of games. Now he’s paying the price.

Mavericks president of basketball operations Donnie Nelson confirmed that Odom has been demoted to the Texas Legends, a D-league affiliate of the Dallas NBA team — but said it was Odom’s idea, as a way of bringing himself up to his expected level of play after his absence.

Odom’s teammates are supportive of the move, considering it sounds like they were quickly tiring of him not contributing to the team.

“Trust factor is always big,” said Jason Kidd. “For that, he’s going to have to earn it with a lot of the guys. But we all give second chances, third chances. For that, we just want him to be him and be comfortable and play.”

“If he can play hard every night and be there for us, it’ll be okay,” added forward Dirk Nowitzki. “It’ll work out. I said two months ago that he can be a big part of what we can do in the playoffs, because his versatility on both ends of the floor is something not a lot of teams have. We’d love to give it a shot and go from there.”

Neither Khloe nor Lamar have directly addressed the move, but on Twitter yesterday Khloe wrote something that makes sense in light of the recent happs: “Crazy/weird week but I’m putting fantastic vibes out into the universe. Vibes do your thing.”