Prince Harry is taking the lead during his first official trip to the Bahamas and South America. What will he do while near the Equator? 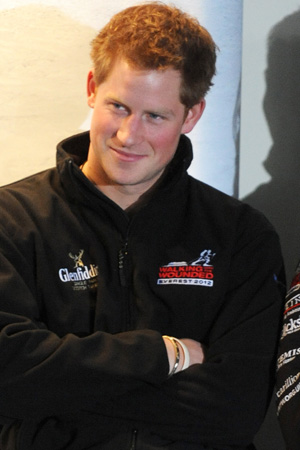 Prince Harry is stepping out for the first time in an official royal capacity — and he’s doing it up big time! The red-headed Prince, 26, will land in Belize late Friday to celebrate the Diamond Jubilee for his grandmother, Queen Elizabeth II. In Belize, he’ll meet with leaders and be on hand for the dedication of “HM Queen Elizabeth II Boulevard.”

The new Apache helicopter captain will also give his first official speech, according to the BBC.

Belize isn’t the only stop on Harry’s trip — he’ll go to Jamaica to meet with Prime Minister Portia Simpson Miller. He’ll also travel to Brazil from March 8-10. Maybe he can swing by the Falkland Islands to visit his big brother while he’s in South America? It’s in the neighborhood, after all.

Harry isn’t the only royal going abroad to celebrate the Queen’s Jubilee in June. Prince William and Kate Middleton will travel to the Pacific Rim and Canada later this spring, according to the BBC.

We’re most excited to see how Harry handles himself during his vacation. The former wild child has matured nicely in recent years, thanks to his military training. The tour will solidify his status as a leader in the vein of his 85-year-old grandmum.

“These are the things that, at her age, she shouldn’t be doing, yet she’s carrying on and doing them,” the Prince said of the Queen’s schedule. His trip will take some of the pressure off of his grandparents, especially since his grandfather, the Duke of Edinburgh, suffered from heart troubles over Christmas.

“Regardless of whether my grandfather seems to be doing his own thing, sort of wandering off like a fish down the river, the fact that he’s there — personally, I don’t think that she could do it without him, especially when they’re both at this age,” Harry said of his grandparents.