Jennifer Lawrence puts her archery skills to the test in the latest clip from The Hunger Games. The Oscar-nominated actress headlines the Gary Ross film, which hits theaters later this month. 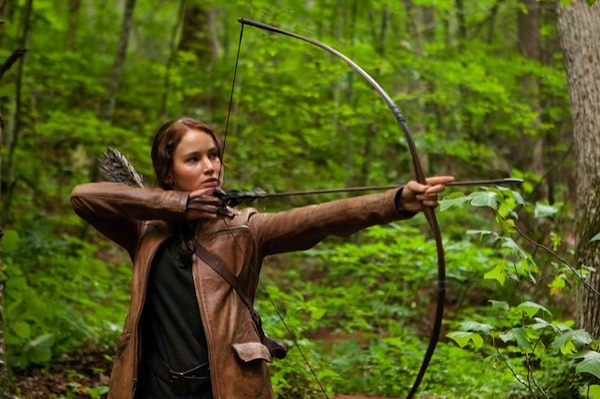 Hunger Games mania is at an all-time high and Lionsgate is adding fuel to the fire. They’ve just released a new clip from the film that features Jennifer Lawrence as series heroine, Katniss Everdeen.

In the book, Katniss is described as a skilled archer whose talent is unmatched. But in this clip, she has to prove herself to the Gamemakers. They’re the folks responsible for designing the Hunger Games and its deadly challenges.

As you’ll see, Katniss uses this as an opportunity to rebel. She notices the powerful men and women enjoying a roasted pig on a platter. She grabs an arrow, sets her bow and shoots it right into the pig’s mouth. It’s a major attention-grabber.

The Hunger Games is one of the most successful book series ever published. It’s no wonder Jennifer Lawrence was initially hesitant about starring in the film. Can you say pressure?

“When I heard they were making the movie, I was like, ‘oh, that’s nice — they’re going to ruin another great book.’ But then I met Gary [Ross, the director], and he was unbelievable and brilliant and genius,” Lawrence revealed.

“I knew from reading the books that I loved The Hunger Games. I just didn’t know if it was worth changing my life for. I’m at a peaceful place right now… I wanted to make sure that when I said yes, I wouldn’t regret it. And I don’t regret it. I would have said no because I was scared, and then I would have been that bitter actress telling my grandkids, ‘I’m the one that turned it down.'”

Watch Jennifer as Katniss in this new clip: