Demi Moore is out of rehab and focusing on staying healthy. Where is she now? Hint: Don’t bother looking for her at home. 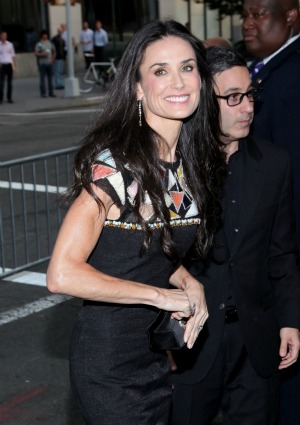 Demi Moore has left rehab but is still keeping her distance from La La Land, opting to go on vacation instead of returning home.

Moore reportedly entered Cirque Lodge in Utah after being hospitalized in January for a seizure during a party at her California home, thought to have been brought on by huffing the high school party drug “whip-its.”

Demi Moore is “on the road to recovery” >>

A source told E! News that the star is now “on vacation” at a top secret location and has no plans to return to the scene of the crime anytime soon.

“She’s in no rush to get back to L.A.,” the source says. “She’s on total lockdown and only talking to a small group of people.”

Moore’s home holds some heavy memories right now. In addition to her alleged OD, the actress shared the home with ex Ashton Kutcher during their marriage — a relationship cut short amidst allegations Kutcher was cheating on her with various 20-something hotties.

Moore has enjoyed the support of her family during this time, including lots of visits from her daughters Rumer and Tallulah while Scout has remained in school on the East coast.

“Of course the situation weighs heavily on me,” Rumer told Germany’s tz-online during a trip to Berlin for a Thomas Sabo jewelry event in February.

“My mother is on the road to recovery,” she added. “It’s slow going but we believe in her.”

“Demi is extremely close with Rumer,” Charlotte Triggs of People magazine told ABCNews.com. “She’s been trying to help her mom through this, but obviously Demi’s got some deeper issues.”

While Moore’s reps blamed her hospitalization on stress and exhaustion, she reportedly entered rehab for substance abuse and an eating disorder.