What’s so funny about Christian women? Kristin Chenoweth, star of the new show GCB, has been accused of mocking her own kind. 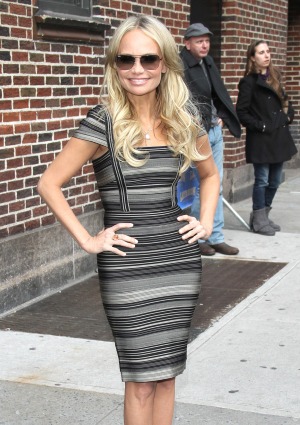 Kristin Chenoweth is in the hot seat defending her new show, GCB, to her fellow Christian females. The star of the show insists she would never “make fun of my own faith,” and that GCB is really an equal opportunity mock-fest.

This Sunday GCB is set to make its debut, but already the show with the evolving title is causing a ruckus. What’s in a name? Well, those not taking kindly to Kristin Chenoweth‘s latest project likely haven’t forgotten the comedy-drama originally was to go under the name Good Christian B****es, then briefly Good Christian Belles before being given the acronym treatment.

The 43-year-old actress, who has openly spoken about her Christian faith previously, plays Carlene Cockburn, a former nerd who has undergone a plastic surgery overhaul and is the current leader of the GCBs.

Kristin Chenoweth defended GCB’s depiction of church-going Texan women to The Hollywood Reporter saying, “I think people should give it a chance. You just can’t judge a book by its cover. I certainly wouldn’t do anything that would make fun of my own faith. This is just chocolate cake, and it’s actually a love letter to Dallas.”

“I think it’s really funny. I remember growing up, it was always the same woman who got the solos in the church choir. And there’s always the woman at the bake sale or the church dinner who wanted to outcook everyone. The thing is, just because you’re a Christian doesn’t mean you’re perfect.

“We all are human. And so this show shows the humanity of it, and I love it. I’m one of them. I grew up in that world… It could take place in a temple, in a community, but we just set ours in a church.”