The 11th Annual Michael Jordan Celebrity Invitational is coming to Vegas this month. Wanna see some of your favorite stars duke it out on the links? Read on to find out how! 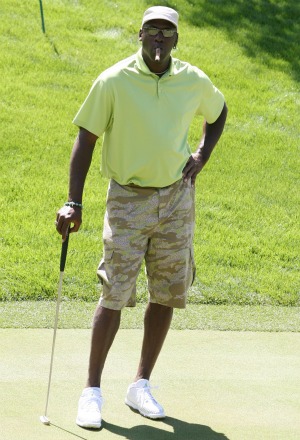 Chances are pretty solid you’ll never get to see Michael Jordan on the basketball court again, but that doesn’t mean you can’t see the legend embroiled in the heat of competition.

The 11th Annual Michael Jordan Celebrity Invitational is returning to Las Vegas March 29 and April 1 — and Mike is bringing along some of his celeb BFFs to help raise money for some of his favorite charities, including the UC San Diego Nevada Cancer Institute and Opportunity Village as well as national organizations Make-A-Wish Foundation, James R. Jordan Foundation and Cats Care, the NBA’s Charlotte Bobcats’ charity arm.

Need a new home? Michael Jordan’s is selling for $29 million >>

So you wanna watch? The event will be held at the ARIA Resort and Casino and Shadow Creek, marking only the second time in its history that the exclusive golf club has opened its doors to the public. Tickets may be purchased at any MGM Resorts International box office outlet, online at www.arialasvegas.com or www.MJCIgolf.com.