One person is uncharacteristically silent on the Snooki pregnancy rumors: Snooki! Find out if her silence really means she’s got a little pickle coming in the next few months. 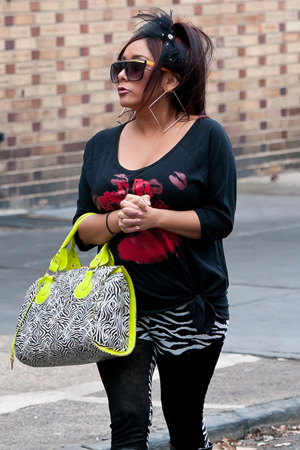 Snooki was quick to shoot down baby rumors when they first emerged in early February. “Does that mean they’re calling me fat?… Radar Online says the craziest things,” the pint-sized reality star told Opie & Anthony when asked about the RadarOnline report of her pregnancy.

“So you’re saying no to this, obviously?” Opie asked.

“No. And, obviously, they’re calling me fat, so I hate you, Radar,” she added.

The rumors re-emerged on Wednesday with a New York Post report. Her rep issued a terse “no comment” on the rumors, but one half of the Jersey Shore Meatballs haven’t said anything about it.

Instead she’s been filmed around New Jersey wearing loose-fitting tops and strategically-placed purses.

There is one thing she’s willing to talk about: Her new reality show spin-off with Shore BFF Jenni “JWoww” Farley, currently filming in Jersey City.

“We want it to be different than Jersey Shore, so it’s not always going to be at the club, drinking and partying,” she told US Weekly. “It’s the first time I’m going to be on my own for real. You’ve only seen the party side of us.”

How convenient for a pregnant woman!

“It’s going to be me and Nicole living in a house: Our ups and downs, and our relationships with our boyfriends who we love dearly, our families — who are just insane! — and our friends who you really don’t get to see on [Jersey Shore],” Farley added.

Let’s just assume that we’ll hear the pregnancy confirmation as soon as the ink dries on those marketing contracts.