Wiz Khalifa is making an honest woman out of Amber Rose. Is this relationship crazy enough to go the distance? Crazier things have happened. 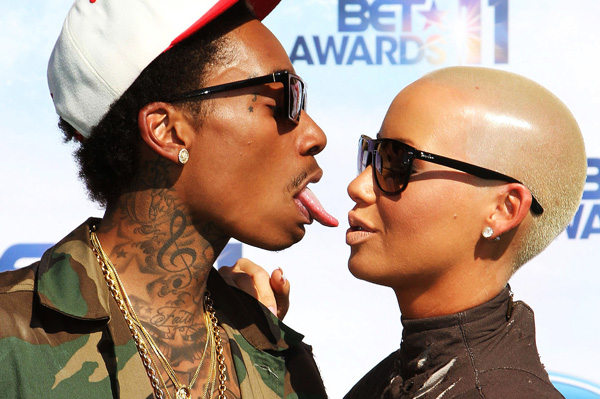 And they said true love never lasts: Rapper Wiz Khalifa proposed to perpetual hip-hop girlfriend Amber Rose — and she, of course, agreed to marry him.

“She Said Yes!!!” the “Black and Yellow” rapper tweeted, along with a photo of Rose wearing the huge oval-cut diamond ring. The blonde model tweeted the same picture a few moments later. “He made me the Happiest Woman in the World!!!!” she wrote.

The eccentric couple started dating in 2011 after Kanye West dumped her. Their relationship quickly went into overdrive with his-and-hers finger tattoos and talk of babies.

“I want to be a mom really bad. I really want babies,” she told Global Grind in August 2011. “I’ll be 28 in October and my maternal instinct is ready.”

The engagement has apparently been in the works for a while — they even talked about it in September at the MTV VMAs.

“We discuss it all the time; like he said, we’re very much in love,” Rose said on the VMA black carpet. “But, ya know, we’re just going to take our time and just enjoy each other right now. We’re both really busy and we work really hard and when the time comes, it’s gonna come.”

To our surprise, Khalifa didn’t back off when his woman talked about commitment.

“Oh yeah, absolutely, man; it’s gonna happen,” he added. “Like we said, we’re just gonna do what’s natural and not let any pressure [get to us], because even [with] the word of it happening, people are like, ‘You guys need to get married now.'”

We’re sure the wedding will be a super classy affair, complete with skintight wedding dresses and plenty of bling. After all, Rose thinks her hubby-to-be has much better style than her ex.

“Wiz kills Kanye in the style category, hands down. My baby wins it all,” she told Complex magazine in January. “Wiz isn’t afraid to be different. He’s not afraid to wear whatever he wants and he doesn’t care. People dress like Wiz more than they dress like my ex.”

Do you think Wiz Khalifa and Amber Rose will last?