Michael Jordan is officially severing ties with the city that made him famous: He’s selling his huge Chicago mansion. Want to buy it? Hope you have a really rich uncle. 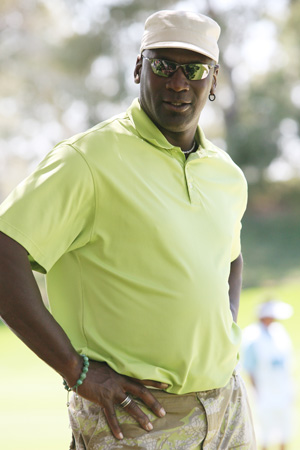 Millions of people are downsizing during the recession and mega-rich celebrities are no different. Take, for instance, Michael Jordan. The former Chicago Bulls baller is looking to unload his mega-mansion in the Illinois city. Interested in buying it? It’ll only set you back a cool $29 million.

The home — set in a secluded Chi-town suburb — boasts nine bedrooms, 15 full baths, four half baths and five fireplaces among its 56,000 square feet. It also has a climate-controlled garage, putting green, pond, tennis court and an indoor basketball facility.

So, why is he selling it?

“Michael is selling for a variety of reasons,” listing broker Katherine Chez Malkin of Baird & Warner Real Estate told the Tribune. “He has many homes and has decided to downsize.”

He lived in the home with his ex-wife, Juanita Jordan. The couple divorced in 2006 and she moved into a custom-built mansion in another part of Chicago. Jordan doesn’t spend much of his time in Chicago anymore, either. The Tribune suspects he spends most of his time with his new fiancée at a $12 million-dollar home in Jupiter, Florida.

Now, the big question: Who can afford this huge property?

“The target buyer is someone who would appreciate the privacy and luxury of the property, as well as its myriad and exceptional features and amenities,” Chez Malkin said.

In other words, another athlete that makes beaucoup bucks. Maybe LeBron James can buy it? That’s about the only person we can think of who would have the kind of cash needed to plunk down on the huge place.

Not bad for a kid who was cut from his high school basketball team, huh?