Does the public waste too much of its attention on reality stars like Kim Kardashian while ignoring serious issues like people struggling to survive in Haiti? Susan Sarandon says yes. 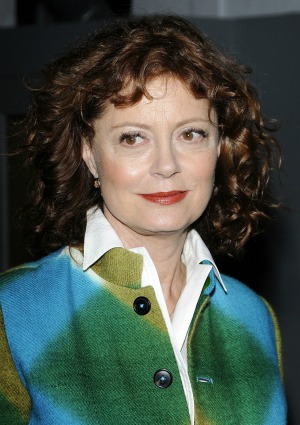 Be honest: When is the last time you turned on the news instead of The Jersey Shore? Can you name all of the Kardashians but don’t know the name of our Secretary of State? If so, Susan Sarandon has a bone to pick with you — and with celebrities who do nothing to help where needed.

The actress-turned-activist has long championed humanitarian causes, and while she has come under fire for it, she says it is the job of every celebrity to peel our attention away from frivolous entertainment and towards things that really matter.

Susan Sarandon: The pope is a Nazi >>

“It’s all of our job — besides the fundraising — to keep the needs of Haiti in the news, especially when the press is busy with Kardashians and whatever they’re following at the moment,” Sarandon told USA Today.

“It’s an interesting myth that has risen that [celebrities] are only doing it for coverage,” she said. “I don’t think anyone that’s gone into a war zone has gone just for the press. There are much easier, more fool-proof ways of getting attention and coverage like going to an awards ceremony.”

One of Sarandon’s current pet projects is Artists for Peace and Justice, a group that has funded over 2,000 surgeries in Haiti since the devastating earthquake that left millions homeless and thousands injured two years ago.

But not all charity groups are created equal — and she warns us to keep our eyes open.

“I only put my name on the line for very few organizations, ones that I can personally vouch for,” she said.

“A lot of the money that has been raised has not been spent, so I’m very cynical about certain members of iconic [non-profit] organizations,” Sarandon says.

“Seek out the ones that can show you what they’ve done. You have to do research — to know that the money you give to an organization will be well-spent, if spent at all,” she explained.