Angelic country singer Taylor Swift reportedly went on a date with pious Denver Broncos quarterback Tim Tebow. Is this a match made in heaven? 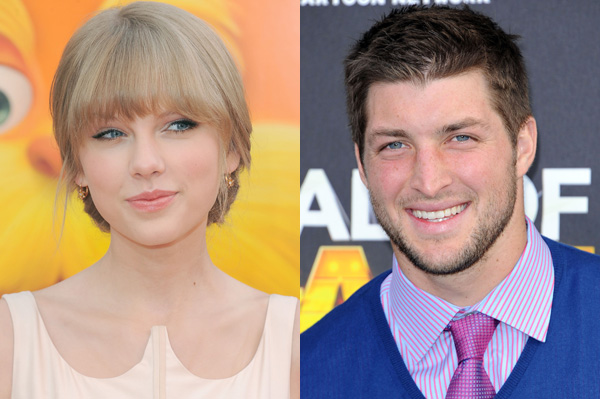 The virginal NFL player and the perpetually-surprised singer were spotted at the Toscanova Italian restaurant in Century City on Monday night, according to CleverTV.com. The pair ate and Tebow walked her out, returning to join two other people inside the restaurant.

They were also spotted chatting at a pre-Oscars bash last week, according to Celebuzz.

“They were together for almost an hour,” a partygoer blabbed to the website. “She approached Tim and he looked more than happy to be talking with her.”

We’ve reached out to Swift’s rep to get confirmation on this story.

We’re really hoping this is true. Swift makes a better partner for Tebow than another music queen, Katy Perry. The newly-divorced singer reportedly set her sights on him during Super Bowl weekend. She even dedicated her raunchy song “Peacock” to him during a pre-game concert.

“[Katy’s] mentioned on more than one occasion how much she likes Tim. Katy’s mom firmly believes the best cure for heartache is to quickly fall in love again. In her mind, Tebow is the perfect guy for her daughter. He’s handsome, charming, intelligent and, above all, a good Christian,” a source told OK! Magazine earlier this year.

Swift is single, so it makes sense. She was rumored to be dating Zac Efron, her co-star from The Lorax, but they squashed those rumors on Ellen.

“You have to be OK with it. If you’re the girl that needs a boyfriend, and, once she loses that boyfriend, needs to replace it with a different boyfriend, it’s just this constant stream of boyfriends all the time,” she told the talk show host in October of being single. “I don’t feel like I ever want to be that girl. I want to be the girl that, when she falls in love, it’s a big deal and it’s a rare thing.”

Do you think Tim Tebow and Taylor Swift make a cute couple?