Zac Efron confirmed what we all suspected: Yes, that was a condom that fell out of his pocket on The Lorax red carpet. 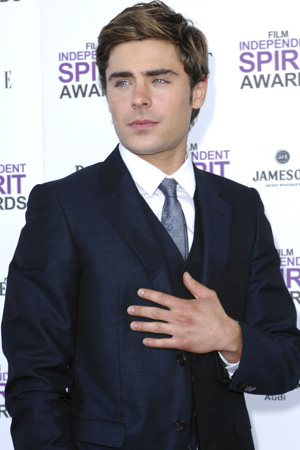 Zac Efron stopped by the Today Show on Thursday to promote his new film with Taylor Swift, The Lorax, but all host Matt Lauer wanted to talk about was Efron’s pocket.

More specifically: What fell out of the actor’s pocket when he walked the red carpet at the film’s premiere. He then went on to confirm what we all suspected when a suspicious video surfaced last week.

“I never really had a pocket-checking policy when I was going on the red carpet before, but now we’ve fully instated one,” he laughed when Lauer asked about the incident.

“You dropped a — a condom on the red carpet,” the Today Show host stammered.

“That was really hard for you to say!” Efron joked. He has a good sense of humor about it — and why wouldn’t he? He’s a red-blooded 24-year-old boy with women (likely) flocking all over him.

Efron also managed to talk a little bit about The Lorax. He revealed that the author’s wife wrote him a letter specifically asking him to take the part — talk about pressure. However, it all makes sense for someone who grew up with Dr. Seuss on constant reading rotation.

“My dad was a huge fan of Dr. Seuss… He’s got an original copy of The Lorax from like 1971 or something like that, so he read it to me growing up,” Efron said. “It was a big part of my life and my education.”

That’s all well and good, but we want to know more about his sex life — was his condom drop a lesson in safe sex for his younger fans?

“That’s a great message,” he joked. “To add to the many messages in the film.”