Jennifer Aniston may have reached the breaking point with those persistent pregnancy rumors. The actress has finally snapped back at the pressure! 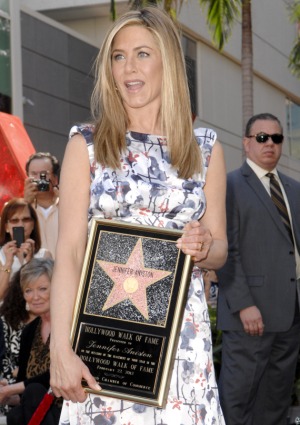 Jennifer Aniston pregnancy and baby talk is nothing new. The actress has been the subject of rumors and speculation for years now, but it seems the 43-year-old may have finally had enough of playing nice about the pressure to procreate.

In an interview with CBS This Morning that aired Sunday, the Wanderlust actress vented that it’s “very narrow-minded” for people to assume she’s unhappy without a baby to nurture.

Speaking of having a baby Jennifer Aniston added, “That doesn’t measure the level of my happiness or my success in my life, in my achievements, in any of that.”

The star, seen here accepting her own star on the Hollywood Walk of Fame on Feb. 22, added during the interview that she doesn’t give “a crap what other people think” and she’s happier “than I’ve ever been.”

Jennifer Aniston also recently spoke of the pregnancy pressure to GQ magazine, “I still kind of go with, if it happens, it happens. I’m calm and peaceful with whatever the plan is. It’s not something where I’m going, ‘I gotta have a kid!'”

When asked if it bugs her that marriage and pregnancy are considered such an important part of her narrative Jennifer Aniston replied, “Part of the picture-perfect life? I think that’s sort of cliché, isn’t it? Like, if you want to be happy, you should have the house, the husband, the kids… Kids are messy!”

Is it time to give the Jennifer Aniston pregnancy gossip a rest?