Hugh Hefner’s son Marston has been formally charged with assaulting his girlfriend, Playboy Playmate of the Year Claire Sinclair. Could he see jail time? 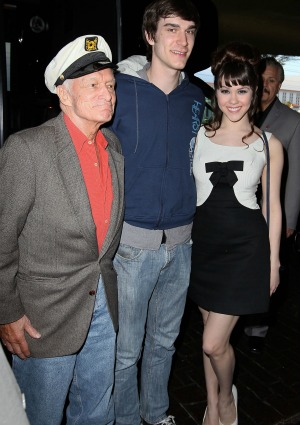 Marston Hefner, son of nudie mag icon Hugh Hefner, has been formally charged with assaulting his girlfriend Claire Sinclair after a domestic dispute two weeks ago.

Sinclair, Playboy Playmate of the Year for 2011, accused Marston of kicking and punching her after the pair fought over a parking space. He was arrested on the scene and later released on $200,000 bail.

The 21-year-old Playboy heir has been charged with spousal or cohabitant battery and vandalism — the last charge based on him throwing her laptop — and must appear in court on March 21.

If Marston is convicted he could face three years of probation or a year in county jail. Sinclair has requested a restraining order and that Marston find himself a good shrink.

“I can only hope Marston gets psychiatric help and seeks medicine for his anger,” she told ABC News after the attack.

“Marston has been unstable throughout the whole course of our relationship,” she later told E! News.

Marston and Sinclair began an on-again, off-again relationship in August 2010 and had just moved in together when the fight occurred. She has since moved out of the apartment and is still awaiting an apology.

“In one aspect, I’m ridiculously offended by the way things are being handled, on the other aspect, I understand. It’s family,” she said of Marston, Hugh and the rest of the Playboy organization. “And they’re looking out for their name, and I understand that, but they need to at least recognize what has happened and apologize for what has happened.”

Although the model had left several messages about the incident to fans, all mentions have since been removed from Twitter.