Nick Jonas has taken the lead in Broadway’s How to Succeed in Business Without Really Trying, a role previously played by Daniel Radcliffe and Darren Criss of Glee. 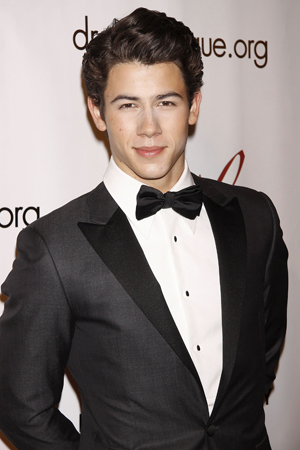 New York City is amazing: the countless attractions, the NYC fashion and even the historic subway experience. And since taking on the lead role in How to Succeed in Business Without Really Trying, the youngest Jonas Brother must love going to work on Broadway!

Too bad Nick Jonas can’t exactly enjoy NYC like others can — between matinee and evening performances, he has to stay indoors and out of the public eye.

“I would love to say hello to [the fans], but they’ve advised me for traffic purposes and other reasons that it’s best not to go out,” he said in an interview. “It could get interesting.”

“The pressure comes in knowing how big a role this is, how big an opportunity this is, knowing that it’s the kind of role that you need to take ownership of and really command,” he explained. “That’s where the pressure comes from, I’d say, not so much from previous Finches or productions or anything like that. It’s the kind of pressure that pushes you to be better, which I think is always the good kind of pressure.”

Does his success on Broadway mean he’s done with The Jonas Brothers? Not necessarily — a new album is in the works.

“We really want to take our time with it and create a great record for our fans. It will be our first record where we’re all men now,” he says. “It will be exciting to go on that journey and see what kind of music we create.”

More updates from Hollywood and Broadway

Hugh Jackman bringing his hotness back to Broadway
The Notebook: On Broadway? It’s coming…
Austin Powers: International Man of Musical?