Dunder Mifflin said goodbye to Steve Carell last season and will soon do the same to James Spader, and possibly Rainn Wilson and Mindy Kaling. 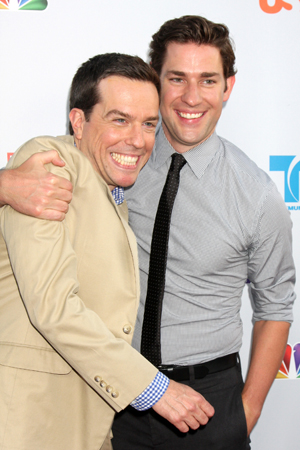 Is it time for the Scranton branch of Dunder Mifflin to close? James Spader has made the decision to leave The Office after only one season of occasional appearances, and if Mindy Kaling‘s upcoming comedy pilot with Fox goes well, she’ll have to leave also.

Even more so, Rainn Wilson is currently in talks for his own Dwight Schrute spin-off series, with a test episode predicted to air in the fall. Sure, the show survived the departure of Steve Carell last season, but how can The Office function without so many crucial employees?

According to The Hollywood Reporter, longstanding Office actors and on-screen couple John Krasinski and Jenna Fischer are currently in talks to return to the NBC mockumentary. Ed Helms, who was “promoted” after Carell’s departure, is also in negotiations to continue forward with the show.

“The Office is still their top-rated scripted show and the linchpin of NBC’s Thursday night comedy block,” says Horizon Media’s Brad Adgate, who notes NBC will likely spend big to produce a ninth season with its current cast. Though this season’s ratings have dropped, The Office is the highest-rated comedy on NBC and captures the youngest audience of any primetime series on the big four networks.

“I can’t imagine a scenario in which the show doesn’t come back for a ninth season,” says one Office insider. We can’t either, but maybe we should start entertaining such an idea, just in case.

More memos from The Office