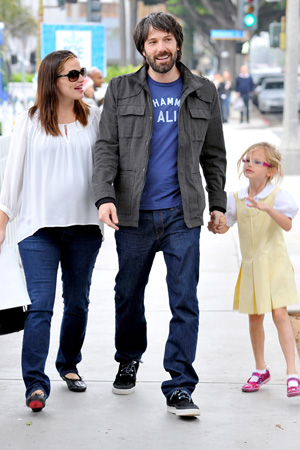 Guess a proud father can’t keep a secret for long! Ben Affleck took to Facebook early Wednesday to reveal the name of his new son with his wife of nearly seven years, Jennifer Garner.

“We are happy to announce on February 27, Jennifer gave birth to a healthy baby boy, Samuel Garner Affleck,” he wrote on his timeline.

We weren’t expecting such a normal name, especially since his sisters, Seraphina and Violet, both have less-than-common monikers. Still, it’s a solid name for an Affleck tot. We have a feeling Sam’s two big sisters won’t like it much, especially given the names they suggested for their new sibling.

“Our girls are working on names. At first they were definitely Disney. It was like, Donald Duck, Minnie Mouse Affleck,” the 39-year-old actress told Jay Leno in January. “And then they’ve moved on. Then it was Peter Pan, Captain Hook, Smee.”

Garner announced her third pregnancy last fall during an appearance on Leno in August 2011. The actress later hinted that they knew the sex of the baby, but wouldn’t spill the details.

We’re pretty sure she’s happy this pregnancy is over, based on comments she made to Ellen DeGeneres.

“The first trimester is just yuck,” Garner told the talk show host. “Kind of an all day sickness. But after that, [it’s] not a big thing except there is one big thing… and that is, my bottom.”

Violet even commented on her mom’s ample assets.

“‘Oh Mom, we have to have a talk,'” the 3-year-old said to Garner. “She said, ‘Mom, your bottom has gotten so big that your panties don’t even begin to cover it.'”

Plenty of mothers can relate to that, Jen.

Do you like Ben Affleck and Jennifer Garner’s name for their son?