Cate Blanchett loves directing plays, but directing films? That’s another matter entirely. See why that’s one job that is not in the cards for her, and what one role she would kill to play. 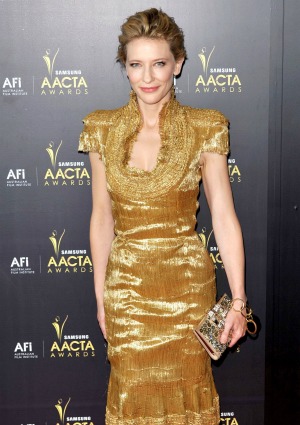 Cate Blanchett passes easily between films and her first love, her job as artistic director at the Sydney Theatre Company, but the actress said directing another film is not something that appeals to her.

In an interview appearing in the April issue of Harper’s Bazaar UK, Blanchett said she simply has no patience for the long delays filmmakers face from studios.

“There is a film I’d love to direct, but I just don’t know if I’ve got the patience,” she told the magazine.

“In theatre, you can have an idea and get on with it. In film, you hear of people sitting on an idea for eight years, by which time the idea has changed and evolved and become something else.”

While she’s waiting, there is one role she would kill to play: The villain in a James Bond film.

James Bond and Daniel Craig are back! >>

Meanwhile, her husband Andrew Upton just wants her to clean the house.

“My husband went through a phase of giving me vacuum cleaners, sewing machines and Mixmasters,” Blanchett explained. “It’s ironic. He is encouraging me to develop a hobby, I think.”

“An actress once advised me, ‘Make sure you do your own laundry — it will keep you honest.'”