Kim Kardashian looks great without makeup — and she wants to show everyone! See how she’s showing off her body on Twitter. 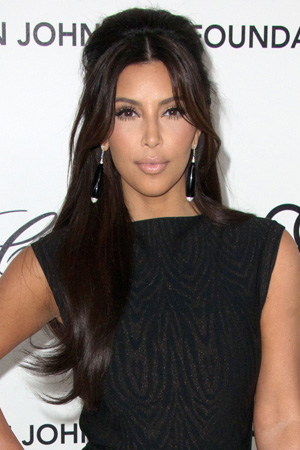 Another day, another picture of Kim Kardashian in her underwear. The 31-year-old reality star tweeted a photo sans makeup and shirt over the weekend.

“Sweatpants hair tie chillin with no make up on,” she tweeted, referencing a Drake song.

Of course, anyone who follows the soon-to-be-divorced reality star on Twitter knows she loves to tweet self-portraits in various stages of dress and undress. She tweeted a series of photos on Jan. 31 that showed her modeling lingerie from the Sears Kardashian Kollection.

‘Photo shoot fresh! All about corals for spring swimwear,” she wrote, along with a photo of her bra. She added another one to “show off” her lighter locks, but really all it showed off was her ample cleavage.

“I dyed my hair lighter yesterday! I’m loving it! New hair color=new beginnings for me You like?”

You get the idea — there are a lot of photos like this. Does she really love herself that much, or is she just constantly looking for compliments to feed her fragile ego? It seems like the latter.

“I don’t find myself as sexy as everyone thinks,” she told Glamour in 2011. ‘I’m a lot more insecure than people would assume, but with little stupid things.”

It’s why she posed for Playboy, too.

“It was an independence thing for me,” she said of the sexy nude shoot at the beginning of her career. “I was always by the book, such the straight arrow when it came to pleasing my parents and being a good daughter. I felt like this was one decision that only I could make. And I think it looks great. I’ll have those pictures forever.”