Khloe Kardashian is once again explaining in detail exactly why she hates Kris Humphries so much — and it surprisingly has nothing to do with how he treated her sister. 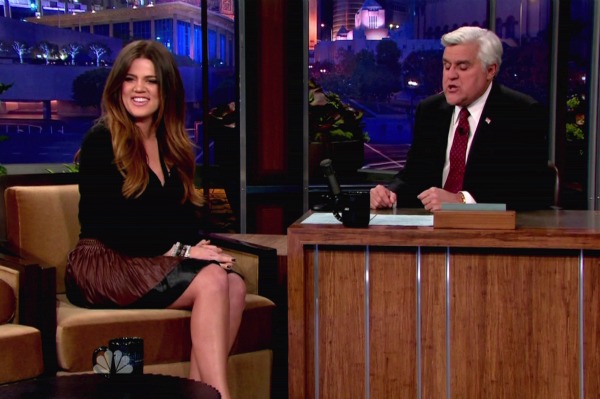 There is still no love lost between Khloe Kardashian and her sister’s ex Kris Humphries, but it turns out the bad blood goes way back to their first meeting. We’ve heard this story before, but Khloe must really like telling it because she trotted the tale out again for Jay Leno.

“When I met Kris the very first time, I had just landed in New York and it was late at night… and he was in Kourtney and Kim’s suite,” Khloe explained during her Tuesday appearance on The Tonight Show.

“And I went in there to say, ‘Hi’ because Kim was like, ‘Oh, I wanna introduce you to my friend,'” she said. “They’d just started dating. And you know, one of the first things that came out of his mouth — like within the first five minutes — was, ‘So, how much you getting paid to fake your marriage? Like how long are you gonna keep this up for?'”

“I was like, ‘Dude, I don’t know if you’re trying to make me laugh,'” she said, adding, “He just rubbed me the wrong way.

“So, ever since then, I had a very defensive wall brought up.”

Khloe married Lamar Odom just a month after they met — but three and a half years later the couple is still going strong, unlike Kris and Kim who got engaged after six months, wed shortly thereafter and split just 72 days after the wedding.

Khloe tried to be supportive of Kim’s decision to marry the guy but she made sure she voiced her doubts, and the problems it caused between the two created major drama on the last season of Kourtney & Kim Take New York.

“I’m gonna be a good sister… but I can’t lie and say this is perfect if I feel in my heart I just didn’t agree with it,” she explained.