Anne Hathaway’s angelic reputation is undeserved. The actress herself says she and troubled star Lindsay Lohan have more in common than most would think. 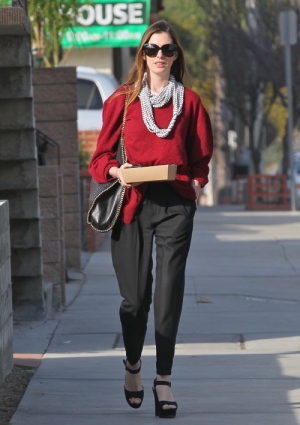 Anne Hathaway is known more for her Princess Diaries days than for hardcore partying, unlike fellow actress Lindsay Lohan. Yet the two apparently have more similarities than are visible to the average gossip-loving eye.

“Lindsay Lohan and I have more in common than people think,” Anne Hathaway declared during a recent interview with The Sun. “We’ve all done things we shouldn’t. It is just that I did stuff at college when nobody knew about it, so I’m not a saint.”

Divulging a few more details about her unsaintly past the 29-year-old added, “I wasted time doing self-destructive things. I found out you can only dance on so many table tops. I got all that out of my system and I am healthy and grounded.”

Despite having had a wild phase during college, Anne Hathaway has largely remained out of trouble as an adult (aside from the drama surrounding ex-boyfriend Raffaello Follieri’s legal trouble over fraud), unlike Lindsay Lohan.

“I try to keep my personal life low-key, particularly after what happened to me,” explained the The Dark Knight Rises actress, crediting her mother with helping her maintain perspective. “As I say, I do need to keep a sense of humor!”

Anne Hathaway is getting hitched! >>

Recalling a time she relied heavily on such skill Anne Hathaway shared, “On my first press interviews after Princess Diaries, I had no idea what to wear.

“I ran out to Banana Republic and bought a bright turquoise blue top. But, unfortunately, because I was in a hot room, I had massive sweat stains. And I was wearing pink leather trousers. After the hair and make-up was complete, I managed to look like a 40-year-old hooker. It was a disaster.

“But if you don’t look back and have a laugh at things like that, you really are taking yourself and life too seriously. Mom will also never discuss or criticize my performances, which is exactly the way it should be. There are plenty of others who can do that.”

Are Lindsay Lohan and Anne Hathaway much alike in your book?