Snooki’s pregnant? Despite having denied that she’s expecting a Jersey bundle of joy just weeks ago, rumors persist. Find out why the pint-sized star may be delaying the baby announcement. 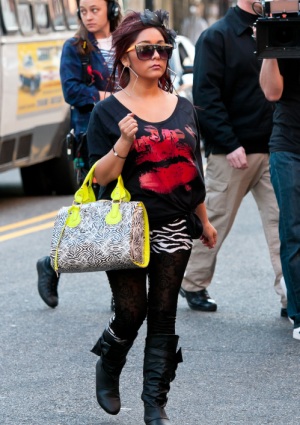 Snooki is pregnant and looking for a deal! Or, at least a source spilling the baby beans to the New York Post believes. Could it be Nicole Polizzi and Jionni LaValle are about to become parents?

Rumors of Snooki’s pregnancy began in early February, with the Jersey Shore star issuing a firm denial there was no pickle in the oven. “I definitely do want kids, but I’m not pregnant,” the 24-year-old said during an appearance on Good Morning America. “Being pregnant should be a real thing and a happy thing, and I’m not.”

Despite the firm denial gossip sources insist Snooki is having a baby, and is already three months along!

“MTV went into crisis mode after they found out,” an unnamed source said. “They’re trying to hide it because it would greatly affect the creative direction of the show.”

Snooki is pictured here on Feb. 28, 2012, filming her Jersey Shore spin-off show Snooki and JWoww Vs. The World. While it’s hard to distinguish any burgeoning bump underneath that loose shirt, the oversized bag is a celebrity’s number one go-to baby bump hiding trick!

Pennsylvania invites Snooki and JWoww to come on over >>

A rep for MTV said the network “doesn’t comment on series in production,” and Snooki’s rep declined to comment when questioned on the reality star’s with-child status.

Why the delay in announcing Snooki’s pregnancy, which would surely create buzz amongst both fans and haters? The mom-to-be is reportedly looking to bankroll her pregnancy with product endorsement deals, with her sights set on becoming “the next Kourtney Kardashian.”

Do you believe the gossip Snooki is pregnant?