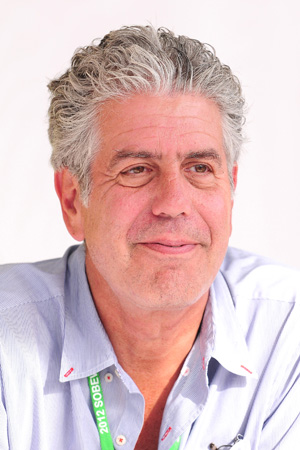 Remember when you were younger and that boy (or girl!) in your class wouldn’t stop picking on you? Your parents probably told you that he or she had a crush on you. So, maybe that explains why No Reservations star Anthony Bourdain won’t stop picking on southern chef Paula Deen.

Well, probably not — the Food Network star took another aim at his Georgia-based nemesis during an appearance at the South Beach Wine and Food Festival in Florida for cashing in on her diabetes diagnosis. The whole tirade started when New York City-based chef Eddie Huang made a comment to Bourdain.

“Aren’t you a hypocrite — smoking on your show and making fun of this nice old lady with diabetes?” Huang said. This set him off.

“You’re right. I did smoke cigarettes for a lot of years on my show. But I wasn’t selling any [expletive] cigarettes… And when I found a spot on my f*****g lung, I didn’t wait three years so I could get a deal selling the patch.”

The questioned stemmed from Bourdain’s criticism of Deen when she came forward with her diabetes diagnosis in January.

“Thinking of getting into the leg-breaking business, so I can profitably sell crutches later,” he tweeted after she made the announcement on NBC’s Today Show. It’s not like Deen cares, though — she said she plans to continue eating the same sort of foods she’s always loved, just in smaller portions.

“I think a few people who have access to a TV camera and ink kind of wanted to hate on me for coming down with something,” she told the Associated Press last week. “But I so don’t worry about it.”

One good thing is coming out of Deen’s diabetes, though — she’s getting in shape and losing the excess pounds.

“We don’t own a scale in our house,” she told People. “Every six months I go for a physical and find out. Now it’s time to see the doctor. She’ll be so happy if I’ve lost weight.”