Bethenny Frankel looks incredible in a bikini. Will she be giving us weight loss tips on her upcoming talk show? Find out. 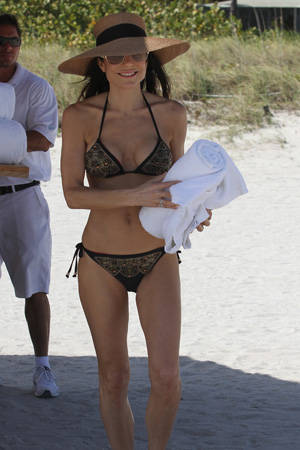 Color us jealous. Reality star Bethenny Frankel was photographed in Miami earlier this week looking way too taut and toned for 41.

That’s not to say that the Bethenny Ever After star hasn’t had her issues with food. The former chef told People in 2010 that her mother suffered from bulimia while she was growing up. The estranged relationship with both of her parents led her to abuse laxatives and fad diets.

“I was completely obsessed my entire life, until my 30s,” she told Life & Style last year. Those days are over, she claimed. “Everything I do [now] is about being healthier.”

She has a reason, too: Her almost 2-year-old daughter, Bryn. Frankel caught flak from other women after giving birth for losing weight too quickly. She countered by saying that pregnancy isn’t an excuse to eat junk and get huge.

“Anybody who’s a mom knows that gaining 35 pounds by the time you’re giving birth five weeks early isn’t really gaining too little. And everyone who’s had a C-section knows they don’t let you eat for days until you pass gas and you’re in the hospital for six days and there I lost weight. And then I went back to normal,” she said in 2010.

Still, the Skinnygirl creator admitted that she’s too thin.

“I’m too thin. Because I’m so busy, I’m not always hungry. I have to make myself eat more because of my busy schedule,” she told Life & Style. Maybe it’s a topic for her upcoming talk show? The Ellen DeGeneres-produced show is getting the green light for later this spring.

“Instead of watching my marriage, my sex life, my conversations about money, I want to involve you,” she told fans on Bravo’s Watch What Happens Live.

“It’s a girlfriends show, but it’s really honest,” she continued. “Just what’s really going on, have an honest conversation without it being just me being in the fishbowl. I want to involve everyone in the conversation.”