Gavin DeGraw is going to be one busy dude over the next several weeks: He’s still on tour and prepping for his turn on the new season of Dancing with the Stars. How will he fit in time to practice? 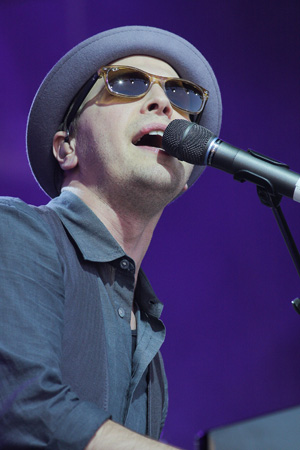 “Not Over You” singer Gavin DeGraw was — as suspected — named one of the contestants on the 14th edition of Dancing with the Stars.

“I’m excited to be on this season of Dancing with the Stars,” DeGraw tweeted after the official announcement. He’s kind of a random choice for the show, right? The singer, 35, isn’t exactly known for his dance moves.

DeGraw’s lack of dance credibility might not be the only thing that threatens his place on the show — he’s going to be touring while prepping for the March 19 premiere.

Thankfully, none of the singer’s tour dates interfere with DWTS tapings. His partner, Karina Smirnoff, will likely travel with him on tour to get ready for the big debut. It’s probably a good idea — a musician’s tour lifestyle isn’t exactly known for being healthy.

Plus, it sounds like the singer likes to eat and be merry in his new adopted hometown of Nashville.

“This place is a must,” DeGraw told CNN International of the city’s Loveless Cafe. “You feel like you are eating at your grandma’s house when you walk into this place. Anything you order is going to feel like your grandma made it. The biscuits are a must!”

Smirnoff will keep him in shape — she’s a disciplined dancer and gave SheKnows the inside look at her diet and exercise tricks last fall.

“It’s just a matter of time. Let yourself get through that one or two hours’ worth where you are struggling,” she told us of getting into shape. “Everyone is a different student. Some are more visual — and others more analytical. So you have to allow yourself to find out what type of a student and dancer you are before you give up.”

You better get ready to work, Gavin.

Who do you think will win this season of Dancing with the Stars?