Jennifer Lawrence says she never wants to be as famous as Kristen Stewart, but her lead role in The Hunger Games is as hyped as any film of The Twilight Saga. 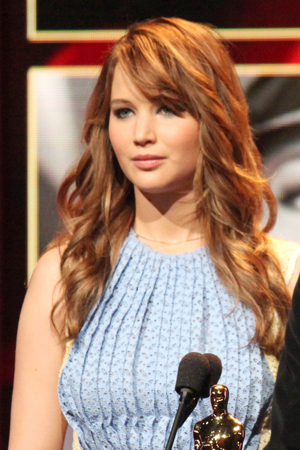 As tickets for next month’s big screen debut of The Hunger Games are selling out across the country, the lack of crowds at movie theaters lately seems to be the calm before the storm of trilogy-crazed fans. Is Jennifer Lawrence ready for the amount of fame she’s signed on for?

Maybe the film’s lead actress isn’t exactly sure what she got herself into.

“I look at Kristen Stewart now and I think, ‘I’d never want to be that famous,'” she confessed in the April issue of Glamour UK. “I can’t imagine how I’d feel if all of a sudden my life was pandemonium,” Jennifer reveals.

However, the comparison isn’t exactly farfetched: The Hunger Games films are causing just as much hype as those in The Twilight Saga, and Lawrence too has landed herself a British boyfriend while filming a movie — Nicholas Hoult of X-Men.

“British men have these wonderful manners, and everything they say is funnier just because of the accent,” she gushed. “There’s this cute ‘I’m trying to be adorable because I know you’re mad at me’ accent, and then the drunk accent where all the consonants have vanished.”

Though she knows that a spot in Hollywood is both a blessing and a curse, Lawrence still stands by her Hunger Games decision.

“In some ways, it’s a hard life, but it’s a great professional life,” she explained. “I’m doing what I love, and then I get months and months of rest. I have a lot of money for a 21-year-old. I can’t stand it when actors complain.”

And she’s definitely not against the perks either — no matter how new she is to even the smaller indulgences.

“Just recently I started letting myself eat things from the minibar,” she said. “When we were kids, we would never open the minibar. A $6 Snickers bar? But the other day I was in a hotel and I was staring at a Snickers bar, and I finally just ate it.”

Will Jennifer Lawrence be able to handle the amount of fame that Kristen Stewart now has?