Angelina Jolie took every opportunity to vamp it up at the 2012 Academy Awards. Mission accomplished: Her long leg is now taking over the web. 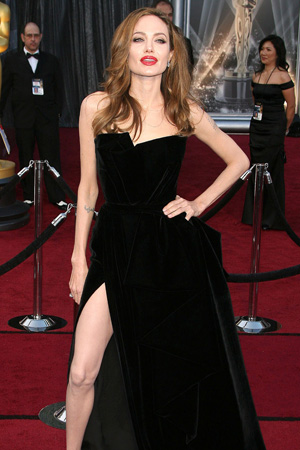 The most memorable moment of the 2012 Oscars was definitely Angelina Jolie’s right leg. The actress — clad in a high-slit black Versace gown — posed incessantly during the show, including when she presented the award for Best Adapted Screenplay. The constant posing was even mocked by winner Jim Rash.

However, the best parts of Jolie’s LegGate are the Internet memes that spawned in the hours afterward. Almost immediately, a parody Twitter account started tweeting updates.

“Look at me!” @angiesrightleg tweeted. “You have to admit I’m one hell of a leg.”

The account racked up thousands of followers in just a few minutes. As of Tuesday, @angiesrightleg had nearly 35,000 fans.

Jolie’s long limb also inspired a new trend — move over Tim Tebow, it’s all about Jolie-ing now, thanks to some enterprising Tumblr users. Our favorite, though, has to be LegBombing. Want to improve a perfectly good photo? Put Angelina Jolie’s leg on it.

Despite the publicity, Jolie reportedly doesn’t know that her leg is such a big deal on the web.

“Angie was vamping it up. No more, nothing less,” a source told RadarOnline. “The photographers went crazy for her on the red carpet and were screaming for her to ‘Show some leg,’ and so she did.”

Despite the way it looked, the source claimed it wasn’t planned.

“It was totally unplanned for Angie to do it again when she was presenting,” the insider said. “She was having fun, living in the moment, like she always does. She is absolutely oblivious to the controversy and attention the sexy pose has created… There was no hidden meaning in what she was doing.”

We’re not buying that — Jolie’s leg knew exactly what it was doing. What about the left leg?

“Left leg and I talked — everything’s cool. Next Oscars, she gets the slit,” @angiesrightleg tweeted.