Megan Fox has found her soul mate — and luckily she got to marry him! Read what she has to say about her much-adored husband and why she is not such a tough girl after all. 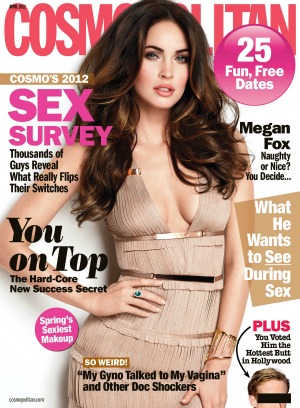 Do you believe in soul mates? Megan Fox does, and she luckily has not only found hers, she got to marry him!

“We’ve had obstacles, and we’ve overcome them. I truly feel like he’s my soul mate,” Fox, 25, told Cosmopolitan magazine of 38-year-old Brian Austin Green, whom she married in June 2010 in a private Hawaiian ceremony attended only by Green’s son.

“I don’t want to sound corny or cliché, but I do believe we are destined to live this part of our lives together.”

Fox reveals that because of her age she totally missed the original Beverly Hills, 90210 hoopla and had no idea who Green was — but that didn’t stop the instant attraction. “I didn’t know who he was, since I was too young for Beverly Hills 90210. But the first time I saw him, I got butterflies. And the first time he casually touched me? There was so much electricity.”

Sounds like Fox is just an ol’ mushpot for love — something that runs counter to the sometimes crass and tough image she has projected in the past.

“It’s because I have tattoos and I say curse words, and apparently, that’s crazy,” she explained. “I think maybe I give off this energy of seeming like I don’t give a f**k, and that’s misinterpreted. But I’m not wild.”

Read the entire interview with Megan Fox in the April issue of Cosmopolitan, hitting newsstands on March 6.

Did Megan Fox fake those “no Botox” pics?