Sherri Shepherd is jumping with excitement over her new job on Dancing With the Stars. What secret trick does she have in her pocket? 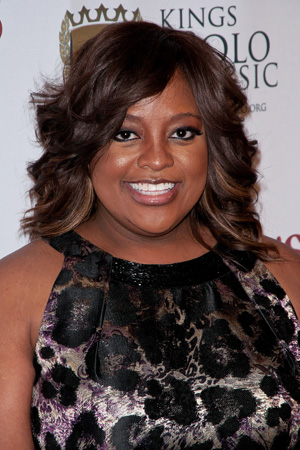 The new cast of Dancing With the Stars was revealed early Tuesday and, as we suspected, Sherri Shepherd is one of the 12 new dancing celebrities. The actress and co-host of The View is paired with Val Chmerkovskiy and couldn’t be happier with her new role.

“He’s so hot, Barbara!” Shepherd joked while on The View Tuesday morning. The newly married television star has been pining for a spot on the show for years — and it’s finally happening.

“I can finally say it DANCING WITH THE STARS,” Shepherd tweeted on Tuesday morning. She tried to downplay the rumors just a couple of days ago, but she really wasn’t fooling anyone.

“Somebody said I was gonna be on that show?” she told HollyScoop. “Wow! I think they say that every year — that I’m going to be on that show. I don’t know if I can move my hips like the folks do on that show.”

Guess we’re going to find out now. She’ll have a good chance to make it far during the 14th season, especially with The View ladies behind her.

“We’re going to get the audience to vote for you like Nancy Grace’s audience voted for her!” Joy Behar proclaimed. Shepherd’s not too worried about that yet. What is she worried about? Her team name.

“Help @iamValC & me out. We need a team name. Val Chmerkovskiy and Sherri Shepherd. What name fits us?” she tweeted.

That’s right Sherri, get the important things out of the way first.

Who are you rooting for on this season of Dancing With the Stars?

15 mins ago
by Daisy Maldonado