Is Natalie Portman finally married to her baby daddy Benjamin Millepied? The couple isn’t talking — but their wedding rings sure are. 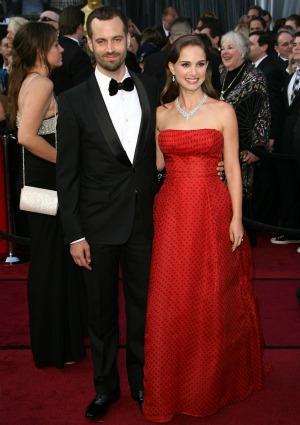 Natalie Portman and Benjamin Millepied went off and got hitched without inviting us. In fact, the whole thing is so hush-hush that the couple won’t even talk about it to the press, instead choosing a shrewd reveal by wearing their wedding rings on the Oscars red carpet Sunday night.

The only person who is actually talking about the union is the couple’s jeweler Jamie Wolf, who revealed to Us Weekly that she designed the rings.

“I designed the wedding rings worn by Benjamin Millepied and Natalie Portman,” Wolf told the mag. “They were made with recycled platinum and conflict free diamonds.”

“We wanted everything about the ring to speak to things that are important to Natalie.”

The couple met on the set of Black Swan, where Portman was the star and Millepied the choreographer (who also played a small role in the film). Her rep confirmed the actress was pregnant and engaged to the dancer in December 2010, just in time for awards season.

Baby Aleph was born in June, but the couple kept the name quiet (it only leaked via an Israeli newspaper) and did not participate in a nearly requisite celebrity magazine cover reveal of their newborn.

Read on for more Natalie Portman

Natalie Portman and Zoe Saldana “Lend a Hand” for charity