John Mayer took some time off to deal with vocal problems, but he’s got his voice back and is ready to hit the road. Is it too much, too soon? 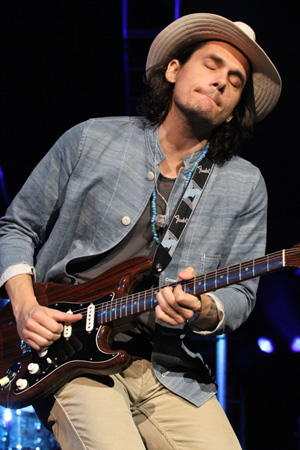 John Mayer is back! The guitar master is hitting the road for the first time in two years later this spring for 18 dates around the country. The tour will support his upcoming album, Born and Raised, set for release in May.

The first single off the album, “Shadow Days”, hit the scene via his Tumblr blog last week.

“Every new record I start, a new aesthetic comes in. I can’t help it,” he said. “I think it’s gonna be more organic, more natural lyrics and chords and artful simplicity.”

“Mayer became passionate about supporting U.S. war veterans following a visit to the Marine Corps’ Camp Lejeune in North Carolina four years ago,” his record label said Monday. “He has since spent time with active military and veterans while touring, and partnered with the Northern California Institute of Research and Education to provide veterans with a healthy reintegration into civilian life which will help heal the battle scars caused by the trauma they experienced.”

In addition, he’s doing away with the pre-sale trend — instead, all of the tickets will go on sale at the same time.

“In order to accommodate as many concertgoers as possible and provide an equal opportunity for purchasing tickets, there will be no pre-sale ticketing period for this tour,” ticket broker Ticketmaster wrote on its website.

Did his vocal problems help him grow up from his “sexual Napalm” days of the past? It sounds like it.

Will you see John Mayer on tour?