Paula Deen is getting active for the first time in far too long, and now can’t even fill out her own wardrobe! In the wake of her Type 2 diabetes announcement, the cooking queen has picked up a few new habits. 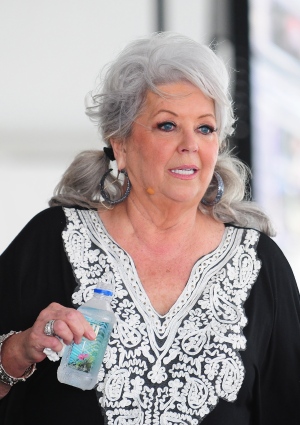 Paula Deen is down not just one, but two pant sizes! The woman notoriously known for her fattening recipes showed up at Sunday’s 2012 South Beach Wine & Food Festival looking noticeably slimmer than she has in years.

“I’ve dropped two pant sizes and I feel great!” Paula Deen confirmed to People. In January the 65-year-old revealed publicly that she suffers from Type 2 diabetes, and has had the condition for three years.

Paula Deen on diabetes scandal: Get over it >>

Paula Deen’s weight loss success in recent weeks is due to the old fashioned exercise more, eat less method. The cook has been walking 30 minutes every day -– and consuming food portions half the size of those she used to eat. She told fans, “It’s amazing how good getting up and moving makes you feel.”

Despite the smaller pant size announcement, Paula Deen can’t put a number on how many pounds she’s lost — as there are no scales in her home!

“We don’t own a scale in our house,” explained Deen. “Every six months I go for a physical and find out. Now it’s time to see the doctor. She’ll be so happy if I’ve lost weight.”

Supporting Paula Deen’s weight loss is son Bobby, who tries to encourage his mother’s exercise without being overbearing. A runner himself, Bobby told People, “I just try to show by example. I live my life, if that affects Mom in a personal way, that’s great.”

“Doesn’t she look nice?” he commented on her slimmed down appearance, sharing that he has given her a pedometer to wear during her new daily walks. “She has a little more pep in her step now. She’d been guilty of being a little too sedentary — like a lot of people.”