Uma Thurman is pregnant again. Who’s her baby daddy? Here’s a hint: It’s someone from her past, and it isn’t Ethan Hawke. 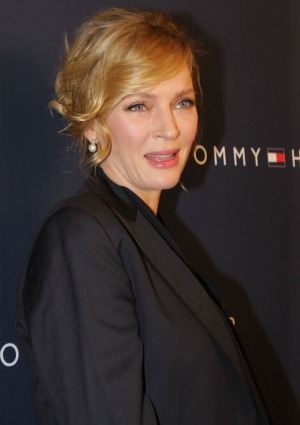 Congratulations to Uma Thurman! The Kill Bill actress is pregnant with her third child, her rep confirmed today, her first with someone other than her ex-husband Ethan Hawke. So who is her baby daddy, anyway?

Apparently ending their engagement in 2009 wasn’t enough to keep this crazy couple apart, because the father is none other than her former fiance, financier Arpad Busson.

“Yes, Uma is pregnant!” a friend of Uma’s told Life & Style before the rep’s confirmation. “She hasn’t announced it yet, but a lot of her friends were asking her because they could tell the difference when they saw her at New York Fashion Week. She’s usually so skinny, but now she has the cutest little bump and a glow about her.”

Thurman and Busson, 49, started dating in 2007. They got engaged in June of 2008 but split in December 2009, reportedly over the strain of maintaining a long-distance relationship while balancing hectic work schedules.

While the pair is reportedly officially back together — the pregnancy is not a result of sexual recycling — there is no word that they have reinstated their engagement, yet.

Thurman’s marriage to Hawke imploded amidst allegations he cheated with the couple’s nanny, whom he later married and had two children with, daughters Clementine and Indiana. Uma and Hawke have two children together, Maya and Levon.

The Smash actress was previously married to Gary Oldman, with whom she had no kids.