The CW has finally found the lead for their Sex and the City prequel, The Carrie Diaries. Starlet AnnaSophia Robb has been tapped to play aspiring writer and fashionista Carrie Bradshaw. 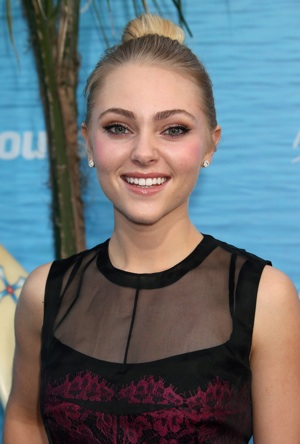 AnnaSophia Robb‘s all grown up. The former child star is heading to the CW for a once — make that twice — in-a-lifetime role.

According to The Hollywood Reporter, the actress will follow in the footsteps of Emmy-winner Sarah Jessica Parker when she takes on Carrie Bradshaw in The Carrie Diaries.

Parker played Carrie for six seasons on HBO’s Sex and the City and reprised the role on the big screen in 2008 and 2010.

Robb’s best known for her breakout performance as Violet in Tim Burton‘s Charlie and the Chocolate Factory. But she’s appeared in several films such as Bridge to Terabithia and Race to Witch Mountain.

The now 18-year-old is ready to take her career to the next level. The Carrie Diaries will center on “a young Carrie Bradshaw as she comes of age in the 1980s, asking her first questions about love, sex, friendship and family while exploring the worlds of high school and Manhattan.”

The show will also follow Carrie’s relationship with Sebastian Kydd and her rivalry with mean girl Donna LaDonna. Similar to Sex and the City, the series will be told from Carrie’s perspective.

Robb was last seen on the big screen in the biopic Soul Surfer, where she played Bethany Hamilton. As a teen, Hamilton made national news after losing her arm in a shark attack.

Robb is currently working on the animated film Khumba, which is scheduled for release next year.

What do you think of the new Carrie Bradshaw?