The Artist Best Actor Jean Dujardin was amped during his Oscars acceptance speech. How so? He dropped a swear word on live television! 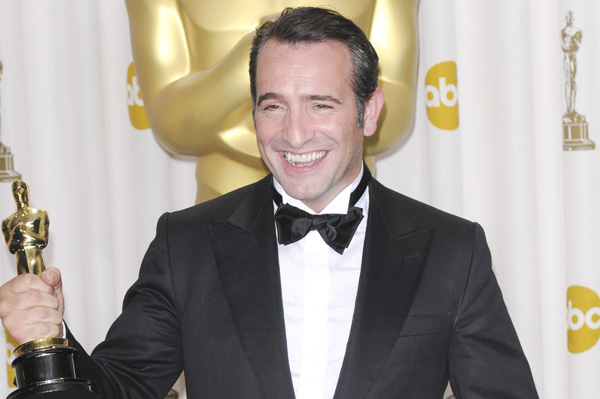 Did you hear Best Actor winner Jean Dujardin drop the f-bomb during his Oscars acceptance speech? You probably didn’t, unless you’re fluent in dirty French. The Artist actor managed to slip the word past the censors and many of the viewers.

“I love your country! Thank you to the academy,” Dujardin said during his speech. “In 1929, Douglas Fairbanks hosted the first Oscars ceremony. Tickets cost $5 and it lasted 15 minutes. Times have changed.”

“If George Valentin could speak, he would say,” launching into French, ‘Thank you so much for this f*****g epic victory!'”

We kind of figured that Dujardin said something cheeky during his speech, but we aren’t French speakers. Other reporters are and asked him about it backstage.

“I’m sorry,” he said, though we doubt he’s really sorry — he won an Oscar! We’d swear too, likely in English.

Will he be taking over America with his acting skills? Not likely. He told reporters backstage — through an interpreter — that he’s a French actor, but would take an American role if another silent one comes along.

We hope they make more throwback roles for Dujardin, especially since he’s so reminiscent of actors from cinema’s Golden Age.