After winning the Academy Award for Best Female Actress in a Leading Role, The Iron Lady’s Meryl Streep calls for a change in Oscar nomination rules.

Actress Meryl Streep has now been nominated for seventeen Academy Awards throughout her career, and though she said in her acceptance speech that she’ll probably never win again, she is calling on the Academy to change the rules regarding nominations — she wants more! 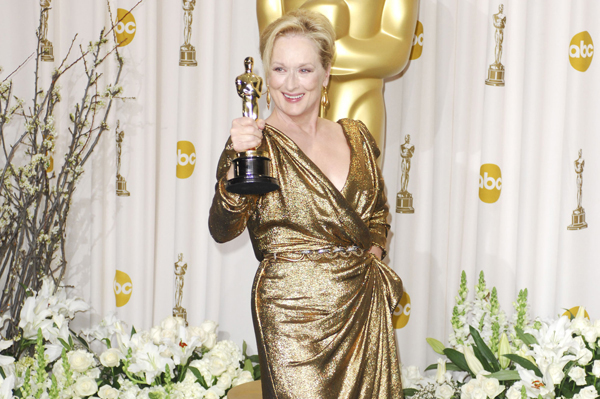 No, not for herself. The Iron Lady actress is asking for more nominations per acting category to further honor her fellow actors who were snubbed this year.

“I think they should have more nominees like they do for best picture,” she told reporters after the awards ceremony, “because this year, some great performances weren’t even nominated. About seven or eight would be good.”

However, she was still incredibly excited to win. “I thought I was so old and jaded, but they call out your name and you go into a white light. I was a kid again, I actually was a kid… two of the nominees weren’t even conceived when I was first nominated.”

Streep also answered why she stopped to kiss Viola Davis, “She knows, she knows. It’s a crapshoot. Two of (the fellow nominees) are my very good friends, any one of them could have been standing there and deserved to.”

Her win last night was her third Oscar in her career, but how does this one compare to her earlier two? “This one’s going to make the other ones look bad, they’re about 30 years old, so they’re going to look a little dingy.”

Do you agree with Meryl Streep about changing the Oscar nomination rules? Or should the categories remain limited?