Angelina Jolie looked alarmingly thin at the Oscars last night, and her leg totally upstaged her. Is the Ice Queen now fodder for mockery? One Oscar winner says yes! 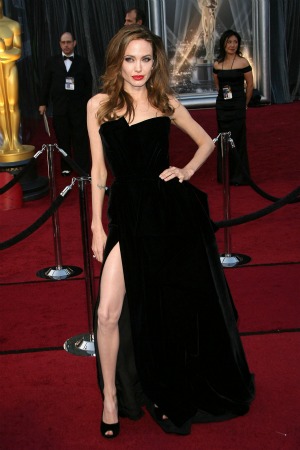 Angelina Jolie made quite the appearance at the Academy Awards last night with her Oscar-nominated baby daddy Brad Pitt in one of her typical boring black dresses — but it was what was underneath that got people talking.

We’re used to the “Angelina is too skinny!” chatter, though. What was truly amusing about her Oscar presentation last night was her studied — and extremely awkward — posing. In a dress that is slit up to there, one’s leg is meant to be seen, right? Jolie took it a bit too far and instead of making it look natural just looked… well, weird. And forced. Like she was doing lunges or something. Totally weird.

In fact, it was so immediately obvious and ridiculous that one of the award winners to which she presented the coveted statue even mocked her, to the delight of the audience.

“It was just an impulse. I was just standing there and I thought…” screenwriter Jim Rash told the Washington Post, trailing off. “I hope it was okay. I hope she thought it was OK. It was a loving tribute.”

The stance immediately lit up Twitter, and “Angelina’s leg” became a hot trending topic of the night.

Better than talking about her weight again, we suppose.