Sacha Baron Cohen “urned” a bit of red carpet notoriety after he attended the Oscars dressed as the main character from his upcoming comedy, The Dictator. Oh — did we mention the part where he dumped the “ashes” of late dictator Kim Jong-II all over Ryan Seacrest? 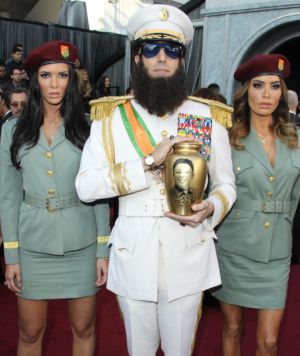 We’ve got a feeling this was just the kind of fiasco suits at the Academy of Motion Picture Arts and Sciences were trying to avoid.

Flanked by military assistants bearing flowers, Cohen did exactly what the Academy had until Saturday ordered him not to — he showed up on the Oscar red carpet as “His Excellency Admiral General Aladeen,” leader of the Republic of Wadiya and the protagonist of the upcoming mockumentary, The Dictator.

Wearing military regalia, Cohen arrived with the urn, which he claimed was filled with the ashes of Kim Jong-Il. The late North Korean dictator died in December.

Aladeen said it was Jong-Il’s “dream to come to the Oscars and be sprinkled over the red carpet and Halle Berry‘s chest.” Since a foot injury kept Halle sidelined from this year’s ceremony, the Admiral General settled for Ry instead.

Is Sacha Baron Cohen banned from attending the Oscars? >>

After the Ash-sault, Cohen said Seacrest could tell people he was “wearing Kim Jong-II.” He was promptly dragged off by a security guard.

Ever the gentleman, Ryan shrugged, “My mom always told me to pack two jackets for red carpets. Always wondered why. Now I know.”

In the days leading up to the Oscars, buzz swirled about whether or not Cohen would even be allowed at the weekend prize-giving. The comic was “banned” from attending the ceremony in character earlier in the week.

Cohen’s previously appeared at awards ceremonies as his other characters, Borat and Bruno. He was vocal about his plans to use the Oscars to promote The Dictator, which opens Stateside on May 11.

After his request to do so was rejected by the all-knowing Academy, Cohen adopted the persona of his dictator alter ego to record a video message, which sent a tongue-in-cheek warning to the event’s organizers.

“While I applaud the Academy for taking away my right to free speech. I warn you if you do not lift your sanctions and give me my tickets back you will face unimaginable consequences.”

He also lamented that the Academy has failed to recognize “classic” Wadiya films, such as When Harry Kidnapped Sally and You’ve Got Mailbomb.

Academy organizers eventually relented and forked over the tickets. A gleeful Aladeen posted the news on The Dictator’s official Twitter feed.

“VICTORY IS OURS! Today the Mighty Nation of Wadiya triumphed over the Zionist snakes of Hollywood… What I am trying to say here is that the Academy have surrendered and sent over two tickets and a parking pass! TODAY OSCAR, TOMORROW OBAMA!”