Awww snap! The claws are out between portly powerhouse Adele and previously plump songbird Jennifer Hudson. Jen is accused of taking a jab at Adele’s waistline just hours after the 21 songstress swept the 2012 Grammy Awards. 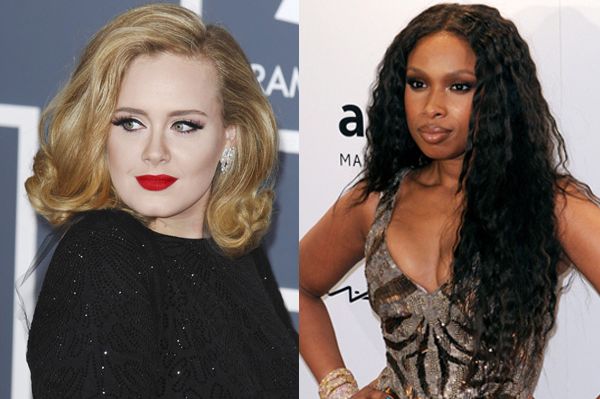 Think it’s safe to assume that a collaboration between once-super-sized singer Jennifer Hudson and British songbird Adele is out of the question? We hear the mega-slimmed-down Hudson found herself on the wrong side of Adele’s wagging finger after telling the curvy singer that she needs to lose weight.

Oh no she didn’t! Yep, she did… at least that’s what the Enquirer is reporting, so take it with a grain of salt.

The gossip rag says the former talent show star cornered the talented Londoner at a Grammys afterparty and struck up a conversation with the opening line, “I used to be heavy like you and, gosh, Weight Watchers saved my life! I can hook you up.”

Jennifer Hudson tweeted about the allegation, calling it false: “Nope, not true. Never happened. Anybody who would do something as dumb as that , I would smack! Who does that! Not me.” She tweeted to another fan: “LOL. Ok em I like mine too n I am not concerned with your curves or anybody else’s either.” Adele’s camp has not responded.

Most folks usually just begin with “Hello,” Jen — but let’s see what transpired.

“There was a very awkward pause and Adele momentarily looked taken aback, but she’s too polite to make a scene so she thanked her for her advice and moved on,” a spywitness tattled to Australia’s New Day.

“Adele has made it pretty clear she doesn’t care what Jennifer or anyone else thinks about her or her weight.”

Nevertheless, friends say Adele is shocked by the level self-obsession running rampant in the City of Angels.

“Her time spent in Tinseltown has exposed her to a whole new level of superficial behavior.”

Adele allegedly worked hard to slim down a little in the weeks ahead of Grammy night, where she performed for the first time since being sidelined by vocal cord surgery in 2011.

“Doctors suggested that less junk food and more exercise would be the all-around right thing for her health, her stamina, even her vocal range.”

In 2011, the Dreamgirls star released a book titled I Got This: How I Changed My Ways and Lost What Weighed Me Down. In the tome, Hudson chronicled her lifelong battle against the bulge and how she ditched “the diet mentality.”

Of course, some friends argue that weight is all Jen seems to talk about these days.

“Her heart is in the right place, but her preaching is starting to get on people’s nerves,” says a pal of the now-skinny J-Hud.

The friend believes Jennifer’s remarks to Adele may have been rooted in jealousy — although the “Spotlight” songstress is the recipient of an Academy Award as well as a Grammy.