Oh to be a fly on the wall at Casa de Sandler these days! The nominations for the 32nd annual Razzie Awards, honoring the year’s worst achievements in film, were announced on the eve of the Academy Awards — and Adam Sandler leads the pack with a record number of nominations. 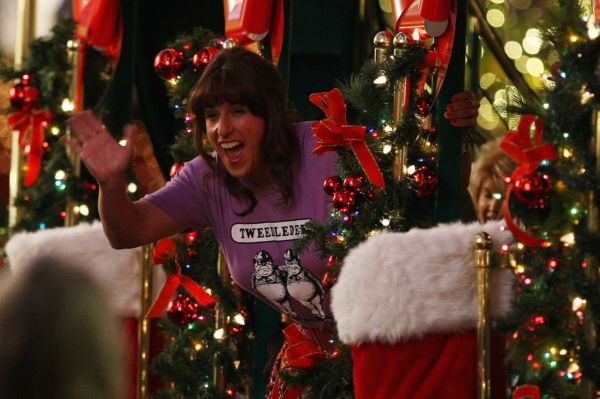 Various theatrical works written, produced and featuring Adam Sandler have been nominated for a record 12 gongs at the 32nd Annual Golden Raspberry Awards (Razzies), the Oscars spoof celebrating the worst films of the past year.

Sandler’s ill-fated big-screen comedy Jack & Jill was the leading Razzie contender during Saturday’s nominations announcement. The film, in which the former funny-guy plays dual roles of a twin brother and sister, will compete for the Worst Picture title with another Sandler-produced stinker, Bucky Larson: Born to be a Star.

Adam’s hat-tips include nominations for Worst Actor for his work in both Jack & Jill and the Jennifer Aniston-assisted rom-com Just Go with It. Sandler’s dual role in the former earned him a matching Worst Actress nomination.

Adam also boasts two nominations as Worst Screen Couple opposite Aniston and supermodel Brooklyn Decker in Just Go with It.

Sandler received nods in the categories for Worst Prequel, Remake, Rip-off or Sequel categories. He nabbed Worst-Screenplay nominations as a writer on both films.

Jack & Jill is also up for a Worst Ensemble prize.

Adam has doubled Eddie Murphy‘s record for the most nominations earned by an individual in a single year. In a bit of irony, Sandler was voted Best Movie Comedy Actor at the People’s Choice Awards in January.

“It’s almost karmic for someone to have made that much razz-able stuff in one year. He has angered someone really powerful, I would say,” said Razzies founder John Wilson, who created the contest as an antidote to the Hollywood awards season.

It was a bad year for gender benders at the box office: A dragged-out Martin Lawrence is nominated for Worst Actress for Big Mommas: Like Father, Like Son. The former sitcom star will face off against Tea Party favorite Sarah Palin for Sarah Palin: The Undefeated and The Twilight Saga’s Kristen Stewart.

Sarah Jessica Parker has two chances to win faux gold after turning in Razzie-worthy performances in New Year’s Eve and I Don’t Know How She Does It.

The Golden Raspberries, normally held the Saturday evening before the Academy Awards, will now go down on April 1, coinciding with April Fools’ Day.

“I have always wondered if we stepped slightly away from lockstep with the Oscars, what would happen. We just kept hoping the Oscars would do their ceremony on April 2, but they just never did.”