Avril Lavigne is in talks to become a judge on The X Factor, production insiders spill. Avril is reportedly close to being tapped as a replacement for Paula Abdul or Nicole Scherzinger on the Fox singing show. The gig would reunite the “Girlfriend” singer with her former mentor, Factor judge L.A. Reid. 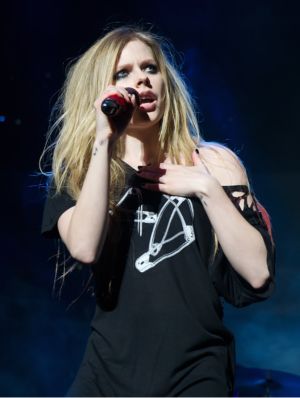 They say Avril Lavigne wants to be an X Factor judge.

Producers of Fox’s ratings-challenged singing competition have refused to be drawn into goss about the celebrities who may (or may not) be in chats to replace axed judges Nicole Scherzinger and Paula Abdul on the show’s upcoming second season.

But insiders insist that the “Girlfriend” hit-maker could be next up for the panel.

The Canadian-born singer-songwriter entered talks with X Factor producers after alerting her management team that she was interested in the possibility of becoming a mentor on Season two, TMZ said Sunday. There are two judges’ seats to fill alongside Simon Cowell and L.A. Reid following last month’s departures of Scherzinger and Abdul.

“According to our sources, Avril had her people reach out to the folks at X Factor to let them know she’d like to be considered for the job. Our sources says Avril feels that since she came up in the biz at such a young age, she can mentor the kids on the show the right way,” TMZ writes.

Avril, a professional singer since the ripe old age of 15, believes her experience in the limelight makes her the perfect candidate to mentor the show’s vocally-inclined wannabes.

And then there’s the hefty paycheck. That looks pretty attractive to Avril too, friends say.

Former Disney star Christina Aguilera reportedly signed a multimillion deal to return as a mentor on the third season of NBC’s The Voice. Jennifer Lopez is believed to earn close to $15 million for her judging role on American Idol.

Lavigne already has a connection to the series: In 2000, Reid signed the 27-year-old to Arista Records in a two-album deal worth $1.25 million. Avril also performed her 2002 breakout hit “Complicated” in a duet with finalist Chris Rene on the X Factor finale last December.

But she’s facing stiff competition for the coveted role: Britney Spears, Janet Jackson, Mariah Carey, Fergie, LeAnn Rimes and another former Reid protégée, Pink, have all been touted as possible replacements for Abdul and Scherzinger.

Simon’s already turned down one mystery celebrity who offered to join the panel… for $50 million.

“Somebody said yes, but if you’d pay me $50 million a year,” the acid-tongued mogul told reporters last week.

Cowell is reportedly planning to move the premiere dates of both the U.K. and U.S. X Factors so that he can judge both programs.

Would you like to see Avril on The X Factor?