Is Kris Jenner out of a job? The blogosphere is buzzing with whispers that Kourtney Kardashian is unhappy with Mom’s controversial approach to managing her daughters’ careers. 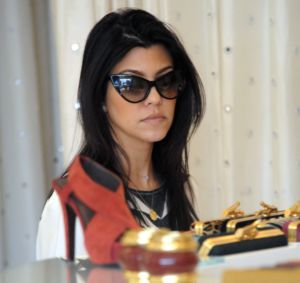 The following item gives new meaning to the expression: “Throw momma from the train!”

Is Momager Kris Jenner out of a job? If eldest daughter Kourtney Kardashian gets her way, the answer may very well be “yes.”

Momma Kris may be largely responsible for the mega-success of the Kardashian Klan, but Kourtney is reportedly considering firing her “Momager” amid allegations that Jenner has been giving special treatment to her younger sisters, Kim and Khloe.

According to word ’round the blogosphere, Kris’ unwillingness to let Kourtney hawk products outside the watchful eye of Mommy is at the heart of the issue. The 32-year-old celebutante, who is expecting a baby girl with longtime beau Scott Disick, has been advised to replace her mother as her manager and handle her business through another rep, according to new reports.

“She’s learned that Kris fields and accepts offers for Kim and Khloe on their own, but if it’s Kourtney, it has to be a package deal. I think Kourtney’s finally fed up. It’s a tense time for the whole family.”

The New Jersey Nets baller accuses Jenner of giving Kim special treatment when she was supposed to be brokering deals for them as a couple. (To be fair, Mama Kris did try to get Humpy a deal as a Fruit of the Loom underwear model.)

In an August interview with ABC News’ Nightline, Jenner told Cynthia McFadden that it’s at times difficult to walk the thin line between being a mom and being a manager.

“One moment I’m talking to Khloe as her mom, and it’s like having a split personality. Suddenly, she’ll turn around and like I’m her manager, ‘I’m your client and you didn’t do this.’ I get scolded or, you know, they’re not happy about something and I have to fix it,” she explained.

“We work on all things together. We work so hard, and I do. I put in my 18-hour days, every single day, whether we’re filming or not.”