Meet The Lorax. He’s a mustached, orange ball of fluff whose sole purpose is to protect trees. Brilliantly voiced by Danny DeVito, this sometimes annoying but always hilarious creature will win your heart and inspire your children to care about trees. 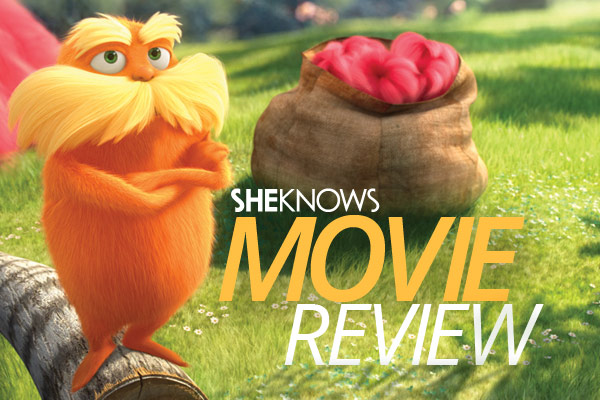 “Put anything in a plastic bottle and people will buy it.”

Zac Efron is the voice of Ted, a tween with a crush on Audrey — sweetly voiced by Taylor Swift — who will do anything to impress her, including finding her a real tree in time for her birthday. You see, Ted and Audrey live in Thneedville, a city without trees or flowers or anything natural at all. In fact, greedy businessman Mr. O’Hare, voiced by Rob Riggle, has plans to sell air in plastic bottles, all while his “air factory” spews out more pollution, malevolently creating more consumer need for clean air. Luckily, with the encouragement of his grammy, lovingly voiced by comedy-queen Betty White, Ted goes on a quest to find a real tree for his beloved Audrey and finds out what happened to them in the first place.

After sneaking out of Thneedville, Ted finds The Once-Ler, voiced by one of my favorite comedians, Ed Helms. The Once-Ler is a misanthropic recluse who tells Ted his woeful tale about chopping down all the “Truffula Trees,” turning them into Thneeds (superfluous knick-knacks) and defeating the irritable but fluffy Lorax, perfectly voiced by Danny DeVito. It seems Thneedville was once a lush forest, full of singing fish and cuddly bears who delighted in eating marshmallows before industrialism went awry. Wide-eyed and hopeful, Ted grows determined to bring trees back to Thneedville, despite the steel-willed Mr. O’Hare and his evil industrial empire.

Wonderfully animated and in happy 3-D, The Lorax is adapted from Dr. Seuss‘ 1971 cautionary tale about what can happen to the environment if consumerism runs out of control. Causing controversy from the logging industry 30 years ago, there’s no doubt there will be 21st century haters, too. But there’s no arguing that trees are important. We couldn’t breathe without them and a film that encourages children to care about preserving and planting trees should be celebrated.

Bottom line: The unfettered fun and 3-D in The Lorax will have you feeling more like you’re on a thrill ride than sitting in a movie theater. It will entertain the whole family while encouraging the next generation to value the environment. Win-win!