When an eccentric sheikh decides to spend 50 million clams to bring salmon fishing to the Yemeni desert, a fish expert finds himself swimming upstream in what appears to be a “fishy” river project. Ewan McGregor stars with Emily Blunt in this quirky, double-finned love story between a man and a woman and a sheikh and his fish. 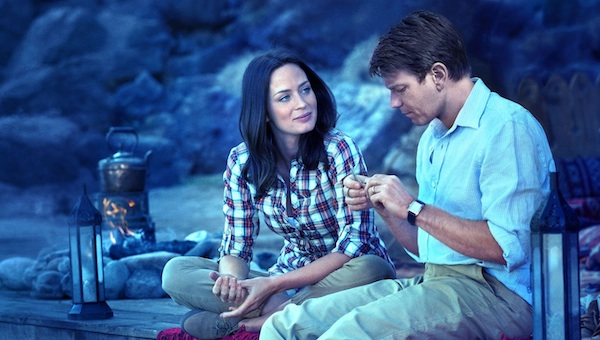 Harriet, played by Emily Blunt, represents a billionaire sheikh, played by the smoking-hot Amr Waked, known as the “George Clooney of the Middle East.” Harriet’s job is to help the sheikh fulfill his dream of bringing salmon fishing to the Yemen. Needing help, she contacts Dr. Alfred Jones, an uptight “fish-ologist” with Asperger’s Syndrome, played by a salty Ewan McGregor. But Dr. Jones wants no part of this outlandish scheme, believing that even if he could figure out how to get 10,000 salmon to the Middle East, the climate would be too hot and dry for them to survive. The stakes are raised, however, when Patricia Maxwell, who is the press secretary for Britain’s prime minister, hears the plan. Played hilariously by the plucky Kristin Scott Thomas, Maxwell thinks she’s found the perfect “goodwill” news story that will take attention away from the bad publicity Britain’s been getting in this volatile region. Once she casts the nets of her public-relations trawl, Dr. Jones has no choice but to get onboard the sheikh’s harebrained boat.

The story goes deeper when we discover Harriet’s recently deployed military boyfriend literally goes missing in action. She turns to Dr. Jones for support, which proves difficult for him, given his idiosyncrasies. As the salmon project begins to look like a sinking ship, the sheikh spouts the importance of having faith and inspires hope in both Harriet and Dr. Jones, who just might be “hooked” on each other.

Based on the book by Paul Torday, Salmon Fishing in the Yemen is a sweet story shot in beautiful Morocco, Scotland and England, and provides a glimpse into the fish-out-of-water lifestyle of an old-world Yemeni sheikh working with Westerners in the digital age. Surprisingly, both have much to learn from each other. The catch-of-the-day in this movie is Kristin Scott Thomas. Her delivery of clipped, cheeky dialogue is deadpan and will have you giggling throughout. As for the “George Clooney of the Middle East,” those dreamy eyes will have you wanting to join Amr Waked‘s harem. Note to Hollywood — more roles for this sexy stingray, please!

Bottom line: Salmon Fishing in the Yemen is an inspirational indie romance for those who enjoy unconventional stories, exotic locales and the power of faith.