Trying to get the inside scoop on who will be taking home an Oscar come Sunday night? Take a gander at how SheKnows’ best bets compare to Facebook and Twitter’s picks! 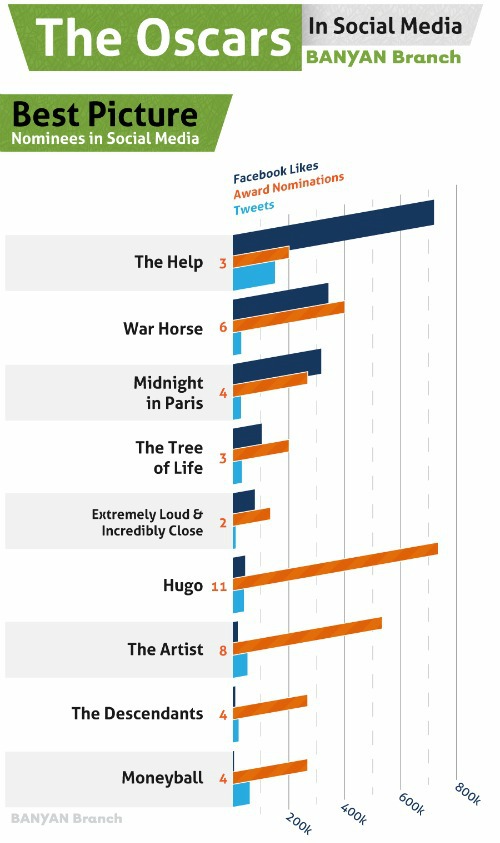 The countdown is on to the 2012 Oscars! Can’t wait to find out who will be the big winners? SheKnows has named our best bets, and now we’re comparing how they stack up to what the social media world says about three highly anticipated categories.

While The Help may have far and away the most Facebook likes, The Artist is our pick for the film that will take home the coveted Best Picture Academy Award this year. Despite the lack of Facebook love, as seen in the infographic above provided by Banyan Branch, our best bet comes in second for most nominations with a respectable eight — only outshined by Hugo‘s 11 nods. 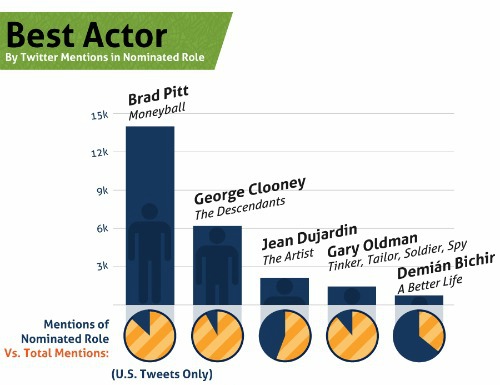 When it comes to who will take home the Oscar for Best Actor it appears Brad Pitt is the popular choice. The 48-year-old, nominated for his Moneyball role, is a popular stateside Twitter topic, but take note of that striped yellow section on the graph — just because the tweets are flying about Brad Pitt doesn’t mean anyone is focused on his acting!

SheKnows’ pick to take home the 2012 Oscar for Best Actor is Jean Dujardin from The Artist. Despite the French actor’s seemingly lack of Twitter buzz, when people are tweeting they’re focused on his performance in the film. 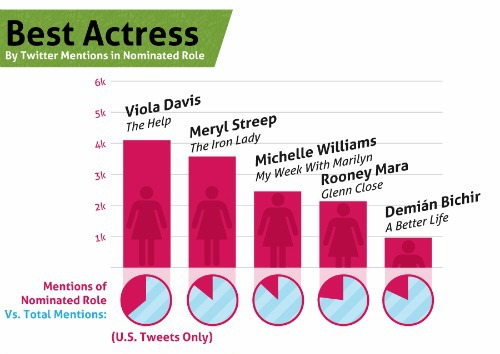 Finally, someone we can all agree upon! Her name is Viola Davis and her performance in The Help was outstanding! Along with the Twitterverse, we love Meryl Streep and the other nominees, but the buzz surrounding Davis simply can’t be denied.

How do your Oscar predictions compare to SheKnows’ and social media’s best bets?