Tyra Banks is now an educated woman! The model and media mogul graduated from Harvard Business School this week, joining other successful celebrities in the school’s alumni society. 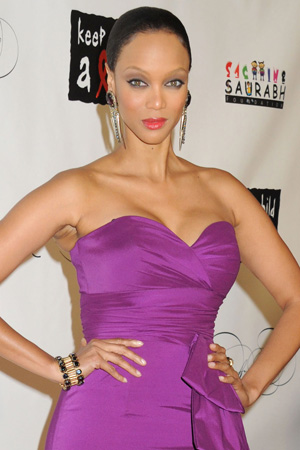 She didn’t get a master’s or a Ph.D., though; the media mogul went through a program designed for “CEOs, COOs, presidents and managing directors of companies with annual sales of at least $5 million,” according to the school’s website.

Not that it really matters to Banks.

“Smiling ear2ear on the Harvard Business School campus w/ my diploma!” she tweeted on Thursday from the Harvard campus.

She shared multiple photos from her big day, including a shot of her exiting the stage with her paper in hand.

“On stage at my Harvard Business School graduation! Lil blurry but SUCH an exciting moment 4 me & wanted 2 share w/u!”

She has every reason to be proud of herself: It wasn’t an easy process, she admitted to VH1. The model even had to stay in the school’s dorms for her program.

“For the first 30 minutes of the class, I’m raising my hand, I’m all into it, ’cause it’s kind of like theory and just like, the social part,” she said last year of her classroom experience. “The last hour, it’s all like Einstein and algebraic equations and craziness. And I’m just like, what the [heck] is going on? Please don’t call on me because it won’t be pretty.”

She has advice for other aspiring students as well. “Don’t be afraid 2 raise ur hand in class!” she tweeted.