Miley Cyrus insisted that she isn’t a huge pothead, but she was spotted outside a medical marijuana shop in Southern California. Miley’s got some explaining to do. 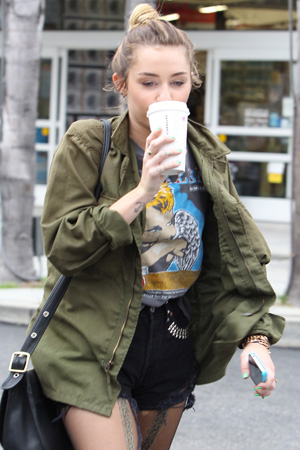 Does Miley Cyrus have a bad case of glaucoma that we don’t know about? The former star of Hannah Montana was spotted outside an alleged medical marijuana dispensary earlier this week, sparking rumors that she is actually a pothead.

Cyrus, 19, was photographed exiting the Sherman Oaks health clinic with a pal, according to X17online.com. She could have been there for her friend, though it doesn’t really matter: Weed is legal in the state of California with a prescription.

We reached out to Cyrus’ rep to get more details on her green pit stop.

The singer and actress was on the receiving end of criticism after she received a Bob Marley cake at her 19th birthday party.

“You know you’re a stoner when friends make you a Bob Marley cake — you know you smoke way too much [expletive] weed,” she joked to her friends and family.

It was a joke, according to her friend, Kelly Osbourne.

“[L]et me make something very clear after @MileyCyrus salvia incident we started calling her bob miley as a JOKE! the cake was also A JOKE!” she tweeted after the uproar. “[I]t makes me sick that @MileyCyrus so called ‘friends’ would sell her out and lead people 2 believe she is someone that she is not!”

“[U] guys if @MileyCyrus is not recording/filming/touring she is works everyday how could she possible do all that if she was a stoner! #think.”

“She’s in a room full of her best friends, and you have one person who comes in there and videos it. The poor girl can’t have one night where she can feel safe in her own world. It’s ridiculous,” he said.