The wax figures of some of Hollywood’s biggest stars were transported to the Hollywood Hills for a photo shoot before this weekend’s Oscars ceremony. 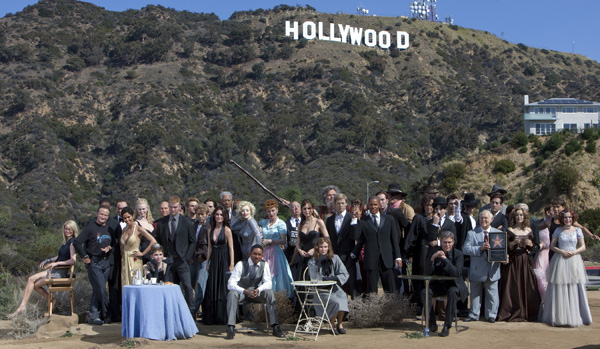 Look closely at the photo: It appears that all of the Oscar winners from the past several decades managed to sync their schedules and meet under the Hollywood sign. Right?

Not so fast. The celebrities may look real, but they’re all part of Madame Tussauds’ Hollywood tribute to the 125th anniversary of Hollywood and the 84th annual Academy Awards ceremony.

The photo features some of the most revered actors from the past century, including Charlie Chaplin, John Wayne, James Dean, Marilyn Monroe, George Clooney, Cameron Diaz, Angelina Jolie and Will Smith.

How did they pull it off? Fourteen members of the museum’s staff transported the figures from inside the exhibit to the Hollywood Hills. This wasn’t exactly the easiest thing ever: It took 10 hours to create the photo.

Our question: Wouldn’t the wax figures melt under the bright California sun? Guess not, though we’re sure any passersby were pretty creeped out by the scene.

Everyone is a bit weirded out by wax celebrities, especially the stars. We know Anderson Cooper was.

“Wow… that is really creepy!” the Silver Fox said at the September 2011 launch of his figure. “Is that what I look like?! It’s a little freaky to see this. I gotta say, I look kinda like a jerk!”