J.K. Rowling has a new book in the works! Word of the Harry Potter author’s return comes with some surprising news: This book isn’t for kids. 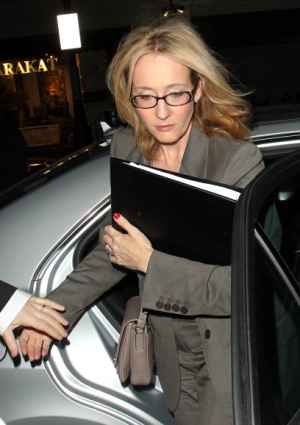 J.K. Rowling has signed a deal to publish a new book, but sorry, kids: This one’s for adults. The Harry Potter author announced her new book plans in a statement released Thursday.

“Although I’ve enjoyed writing it every bit as much, my next book will be very different to the Harry Potter series, which has been published so brilliantly by Bloomsbury and my other publishers around the world,” J.K. Rowling said.

The 46-year-old continued, “The freedom to explore new territory is a gift that Harry‘s success has brought me, and with that new territory, it seemed a logical progression to have a new publisher. I am delighted to have a second publishing home in Little, Brown, and a publishing team that will be a great partner in this new phase of my writing life.”

Now that word is out about J.K. Rowling’s new book, fans can’t help but speculate what it will be about. Msnbc reports on the gossip that the author is working on a crime novel:

There have been rumors for years that Rowling was working on a crime novel set in the Scottish capital of Edinburgh. However, in 2007, crime author Ian Rankin told the U.K. Guardian that the report, supposedly based on his wife Miranda having spotted Rowling “scribbling away” in an Edinburgh cafe, was “a joke that got out of hand.”

While the title, release date and plot details were not included in the statement announcing J.K. Rowling’s new book, we can confirm the novel will be published in both the United States and the U.K., and will be available in both print and electronic formats.

Do you think J.K. Rowling can work her Harry Potter magic in a book for adults?