Buzz is bubbling up about what stunt notorious prankster Sacha Baron Cohen might pull at Sunday’s Academy Awards. Let’s see what Admiral General Aladeen has to say about it. 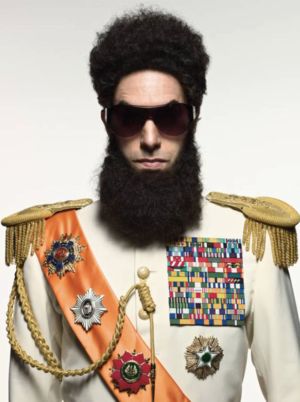 Mockumentary star Sacha Baron Cohen has upset the Academy of Motion Picture Arts and Sciences with his plans to attend its 84th Annual Academy Awards as the character from his upcoming box office comedy, The Dictator.

The Paramount Pictures spoof is inspired by Zabibah and the King, a novel penned by Iraqi leader Saddam Hussein. The Dictator tells the “heroic story of a Middle Eastern dictator who risks his life to ensure that democracy never comes to the country he so lovingly oppressed.”

The Interwebs went wild Wednesday as dish that Cohen was prohibited from attending this weekend’s ceremony made headlines. This isn’t exactly true, but show organizers have pulled the plug on Sacha’s plans to walk the red carpet in character as his Hussein-inspired leader.

Cohen called in to The Today Show Friday morning, in character as Admiral General Shabazz Aladeen, the bearded and heavily accented leader of the Republic of Wadiya.

“I actually delayed 30 executions to do this!” he told Ann Curry and Carl Quintanilla.

The Admiral General was asked to respond to reports that his presence is not wanted at Sunday’s Oscars.

Is Sacha Baron Cohen banned from attending the Oscars? >>

“Those folks at the Academy have banned me,” the tyrant replied. “Normally, I would be impressed by an act of cowardice by a faceless regime, but this is personal. I have issued them an ultimatum. They have until midday on Sunday to give me my tickets back, or they will face unforeseen and unimaginable circumstances!”

He added, “How is your eunuch, Al Roker?”

Cohen, 40, has not been banned, according to an Academy spokesperson. But Oscar organizers aren’t mincing words in letting the Golden Globe winner know that he isn’t allowed to transform their red carpet into a circus just to promote his movie.

That means no showing up dressed as the dictator. Sacha is welcome to attend the prize-giving, provided he can behave himself.

After all, he is a cast member of this year’s leading Oscar contender, Hugo. The Martin Scorsese 3D animated feature is up for 11 gongs at this weekend’s ceremony, including one for best picture.

“We don’t think it’s appropriate, but his tickets haven’t been pulled. We’re waiting to hear back. We haven’t banned him,” a rep for the Academy said this week.

Cohen often uses big events to hype his features. Think of it as a billboard for the attention-starved.

Just weeks before Borat was released in 2006, Cohen showed up at the Toronto International Film Festival dressed as his TV journalist alter ego… and riding a wagon pulled by “Kazakhstani peasant women.” The following year, Cohen asked to present an Oscar dressed as the same character.

Yeah, that didn’t make it past the Academy, either.

To drum up exposure for his role as gay fashionisto Bruno, Cohen teamed up with Eminem for a bum-in-face stunt that left fans and gawkers in stitches during the 2009 MTV Video Music Awards.

The actor is reportedly “upset hat he’s not being allowed to attend the event as the General.”

“In his mind, this is the kind of stuff that the Oscars needs!” an informant told Us Weekly Thursday.

TMZ chief Harvey Levin agrees. He says the Cohen Oscar drama highlights the fact that the Academy needs to work on bringing Hollywood’s biggest night into the 21st century.

“What is it? That the Oscars are not supposed to be promotional? Of course it’s promotional, the whole thing’s promotional! It’s probably because — ‘Oh my god, he’s edgy, he’s going to do something that isn’t between the lines.'”

The Dictator marches into theaters on May 11.